Tianzhuo Chen incorporates continental philosophy, eastern religion and rave culture into the creation of mind-expanding new worlds. He opens his Fact Residency with The Dust, a collaboration with 33EMYBW.

According to Tianzhuo Chen, everything starts with a melody. Taken in context of the kaleidoscopic performance pieces he is best known for this concept might seem simplistic. Over the last few years his practice has only become more intricate and complex, stitching together elements from experimental theatre, rave culture, Hindu and traditional Chinese imagery, as well as his own Tibetan Buddhist beliefs, into mind-expanding immersive events. From ADAHA (2014) and ISHVARA (2016) to An Atypical Brain Damage (2017) and, most recently, Trance, his projects can be understood as esoteric exercises in complex world-building, with Chen terraforming nightclubs, theatres and gallery floors to create psychedelic landscapes for carnivalesque entities that challenge the limits of perception and understanding.

Even so, a fundamentally melodic vein unmistakably runs through all of these worlds. As Tianzhuo Chen was realising his art practice while enrolled at Central Saint Martin’s, he discovered London’s clubbing scene. On his return to China he went on to found Asian Dope Boys, a multidisciplinary art, performance and club collective that can just as often be found at Shanghai’s legendary ALL Club as they can in gallery spaces around the world. An early work, entitled Tianzhuo’s Acid Club, took the form of a temporary club space in Beijing’s Star Gallery, elevating the concept of a show opening into the show itself by blurring the lines between art event, party and ceremony. Chen’s preoccupation with electronic music is also apparent in his stunning video works G.H.O.S.T. and Light Luxury, the former of which features music from French-Vietnamese producer Nodey and both of which are set to the sounds of self-described “modern shaman” Aïsha Devi, another artist who sees the potential for profound ritual in the rave.

Music provides a convergence point in the work of Tianzhuo Chen, and it is his ability to pick out a melody among the colour, light and cacophony of religion, philosophy and hedonistic debauchery that provides the energetic core of his work. Smashing together eastern and western cultures in an absurd amalgam, Chen orchestrates multidisciplinary art rituals that gesture towards the transcendent while remaining firmly grounded in earthly bodies, as Travis Jeppesen writes in Artforum: “Chen’s immersive protocol is suffused with his own yearning for transcendence, that fiery demand to get beyond this body, along with the dread that maybe this is all we’ve really got.” But it all starts with music, a melody in the artist’s head that swells to encompass the heavens and the earth.

In Chen’s new work, ‘The Dust’, commissioned by Beijing’s Macalline Art Center, the artist’s demand to get beyond the body leads him to consider what the performative aspects of ritual and ceremony look like in the absence of human beings. Situating ceremonial objects, farming tools, vultures, which have special significance in Tibetan Buddhism, and the landscape around Cuogao Village and Damu Temple in the Nagqu District of Tibet as the work’s primary protagonists, Chen positions the human condition as inherently Sisyphean. He documents the instruments of mankind’s struggle to atone for original sin, moving from remnants of ancient life and images of natural beauty to water-powered prayer wheels, the wreckage of industrial machinery and rows of human skulls. Chen reveals a world in disorder, objects and instruments linked together by the absurd logic of chaos and creation. “In a universe suddenly divested of illusions and lights, man feels an alien, a stranger,” writes Albert Camus in The Myth of Sisyphus. “This divorce between man and his life, the actor and his setting, is properly the feeling of absurdity.”

It is this sense of absurdity, that can be understood as stemming from the separation of ritual and ceremony from the body, that Chen addresses with The Dust. Inspired by the funeral ritual of the sky burial, in which the deceased is left out in the elements to be scavenged by the birds, the short film was captured during a week-long religious retreat. According to the beliefs of Vajrayana Buddhism, at the point of death the spirit leaves the body, leaving its corporeal form as an empty vessel: meat for the birds that will eventually return to the dust. In this way Chen responds to Camus’s assertion that “it is barely possible to speak of the experience of others’ deaths. It is a substitute, an illusion, and it never quite convinces us.” Over the course of The Dust the artist maps the experience of death and rebirth, beginning with the water and mud of the earth and ending in the sky, blown about by the mountain winds. For Chen this is what remains in the absence of the human, as writer and academic Oxi Pëng puts it in a poem accompanying the film: “there is no such species / called ‘human’. / but only the prayers’ everlasting dreams, / flowing into the heart of the earth.”

Observing the instruments of ritual, separated from the context of social religious interaction, it is music that guides us through this deserted landscape, filling the void left by human absence. Glistening peels of electronic chimes and gongs give way to lurching synth swells in the film’s stunning score from SVBKVLT artist 33EMYBW, which bookends a field recording made by Chen of a Buddhist ceremony he was permitted to document. Setting the sounds of religious practice predicated on the observance of the body against various images of death – skulls, stuffed animals, vultures – Chen subverts the illusion of the experience of death, instead tracing a map of its material reality. When the flesh has decomposed to dust what remains are the prayers of those who are left behind, as well as the music they play in remembrance, or as Oxi Peng describes it: “the mystic organ that grinds the silver wind / penetrated by the forgotten memories of the unknown.”

By exploring Tibetan Buddhist attitudes towards death and burial Tianzhuo Chen circles around what Albert Camus terms “absurd freedom”, an acceptance of the chaotic nature of life and death that enables a certain existential clarity. “Completely turned toward death,” writes Camus, “the absurd man feels released from everything outside that passionate attention crystallising in him.” This is perhaps the absurd freedom one arrives at when the burning desire to transcend ones corporeal form harmoniously coexists with the understanding that, in this life, the body is all we have. The coherence of these two understandings is played out across the sounds and images of The Dust, guided by the searching eye of Tianzhuo Chen. As Travis Jeppesen points out, his is a space beyond both imminence and transcendence, or, perhaps, between: “a sphere in which death and life are not mutually exclusive.” 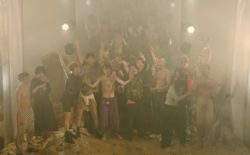 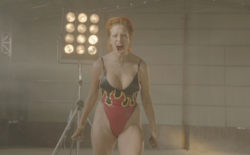 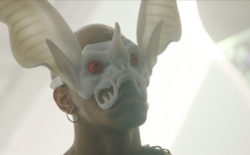 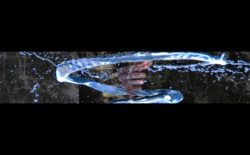