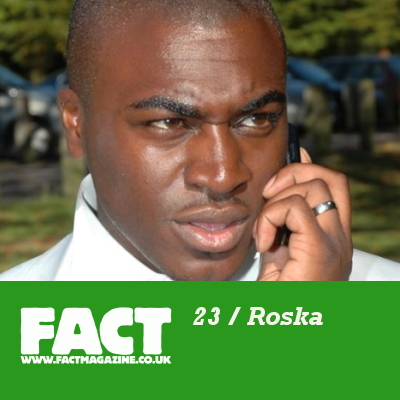 The 23rd exclusive FACT mix comes courtesy of Roska. Here’s what we said about the Norwood funky don when we profiled him in our December/January issue:

“As for many of the scene’s notable figures, UK garage was Londoner Roska’s entry point into music-making: “I started MCing, me and my cousins just messing about in the bedroom and stuff like that. We did a few raves, and then we went our separate ways. It was all grime after that, and we weren’t really interested in it.”

“Alienated by the badman chat endemic to grime – “a lot of the stuff that MCs were talking about, the gun lyrics, just didn’t relate to me” – Roska fell under the spell of house and broken beat, and swapped his mic for a producer’s chair. “These days I prefer being in the background, to be honest…” Roska’s three 12”s to date are already underground classics: the massive ‘Feeline’, notable for its Perlon-alike B-side ‘Boxed In’, the Climate Change EP and, most recently, Elevated Levels – on which you’ll find ‘Our Father’, a bolshy highlight of Marcus Nasty and Mak10’s scene-surveying September mix for Rinse.”

He’s one of our favourite DJs around, and his FACT mix features thirty swiftly-mixed tracks, from tried and tested floor-fillers (‘Sirens’, ‘Yellowtail’) to special dubs of ‘Feeline’, ‘Gabrieylle’ refix and ‘Frontline’ and forthcoming Roska material. Dig in:

30 Roska – Over the Horizons