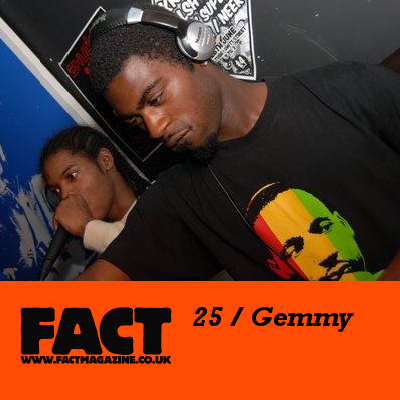 Gemmy first came to our attention last summer with ‘Bk To The Future’ and ‘Bass Transmitter’, two strained, snyth-driven work-outs that were released on Peverelist’s Punch Drunk imprint later in the year. Since then, he’s undergone a rapid rise to infamy – he was one of our Producers to Watch for ’09, his next single will be released by Planet Mu, and he’s part of the ‘Purple Trinity’ group with Joker and Guido.

Gemmy’s FACT mix features ‘Bk To The Future’ alongside unreleased tracks including ‘Johnny 5’, ‘Purple Moon’ and ‘Shanti Riddim’, new tracks by Joker, Rustie and Jakes, and RSD’s ‘Pretty Bright Light’ – a minor-classic in our eyes. Just click on the link below to download Gemmy’s mix, and while you’re doing so make sure to scroll down for our interview with the man himself.

How did you start making music?

“Basically I started off as an MC, and it got to the point where I wanted to put down tracks but I didn’t want to use other people’s material – I was making hip-hop back then, so I started making beats ‘n’ that… Gradually I was less MCing, and more focused on producing. I was into garage, and then it just sort of took off, and I started making dubstep…”

Was it that your style was naturally going that way, or was it that you heard dubstep and wanted to make stuff in that style?

“I used to be strong on the whole grime thing…I wouldn’t even say grime even, it was more just experimental music, but it came off of grime. It was like I went to a couple of raves – some people showed me a bit of an insight into dubstep, and it was close to grime anyway at that stage…”

Yeah, there was less of a distinction in that period. Were these Pinch’s raves?

“Yeah, raves put on by Pinch, Subloaded, some little ones like Ruffnek Discotech – and then I went to the whole H.E.N.C.H. thing as well – the H.E.N.C.H. nights, it just sort of came from there… I was getting influenced by it, and I just tried to copy things, and see what it was saying.”

How did you get more actively involved in it – just going and giving out beats?

“Yeah. I was always making music like; every day… It’s a personal thing for me – it’s not something where I really want to show people the whole process, but I do it to get by really. So those influences were coming in, but it was our own sort of style really – I used to bounce ideas off of Joker and that…”

Were you and Joker doing a similar sort of thing then? ‘Cause you showed him how to use Reason, right?

“Nah, I wouldn’t say I taught him how to use Reason – I basically just showed him what Reason could do, and he went his own way and started making his own things… And then he came to me, and he was like “I tried this, I made this on Reason”, and I’d be like “I got this”, and then we’d just bounce off; like show each other how to make these sounds basically.”

I can’t really think of anyone else in the whole grime/dubstep spectrum who really has a style like you and Joker- the way you use synths, it reminds me of early-’90s Death Row – that was the first music I loved.

“Yeah yeah, ’cause like I said, it came from hip-hop with us. It’s all sort of hip-hop influenced- that’s always been there. But also the ’80s stuff as well – like the real basic instruments; it’s the same with the computer games – those real basic sounds; midi sounds, 808 sounds…

“With 8-bit and 16-bit computers, they had to make the most of what theyhad, and it’s the same when weuse snyths. Like we never had any singers who could sing good, that’swhy we used the snyths to sing for us.”

“That’s it, that’s it. With the influences as well – it’s like with the computer games – back then, with 8-bit and 16-bit computers, they had to make the most of what they had – they didn’t have any singers to use – and it’s the same when we use snyths. Like we never had any singers who could sing good, that’s why we used the snyths to sing for us. I don’t know, they really hit the notes. That’s sort of like a personal thing for me…”

I remember seeing Joker saying that he pictures a purple picture when he makes tunes – what’s your approach like?

“Yeah, cuz like, purple’s just that colour like… I dunno. It’s hard to explain. I don’t know.”

It’s mad how your tunes do sound purple though. Like you can’t really explain how, but it’s there.

The thing with you, Guido and Joker being the ‘Purple Trilogy’ – is that an actual title, or just something people say?

“Yeah, that’s just a title that we roll under; cause we’re all from the same background, and we’re all into the same sort of sounds; we use similar sounds. Guido uses some of the same artists that we do, and back then he was another guy who used to bounce ideas off us – he’s always been there. We all sort of gather round ideas and stuff.”

So how did you go from just being a guy making tunes to having singles on Punch Drunk and Planet Mu?

“Basically, I’ve always had tunes, and I’ve always tried to promote them, but things never used to really go to plan. I’ve always been trying to get music and make people listen to it though; like people would come ’round my house and be like “G, what’s going on man, you’re sitting on a goldmine, like you need to do something”. So I’ve always been trying to promote my stuff – even when I was on a hip-hop thing, and when I used to make drum and bass. Basically, for the whole release thing – Joker was playing a few bits back then, like ‘BT Tower’, people was liking that, and I had a few people asking me for a few bits – like Appleblim, and obviously Pev[erelist]; just giving them to a few Bristol people… they played them, and stuff got about basically.

“Bristol’s just one big community man – everyone supports everyone. That’s what Bristol’s about.”

So, what else have you got in the pipeline for this year?

“More big tunes man. More experimental things – I don’t know; I can’t really say, I can do anything really. I’ll try anything, there’s no limit. More good music, that’s what I can say – more good music…”