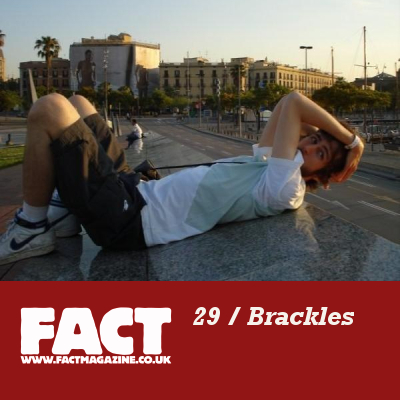 We’ve had a lot of great mixes in since we started the FACT podcast series. Number 29 by Brackles, the man headlining the party we’re throwing this Sunday at the Lock Tavern, is right up with the best.

Here’s what we said about him last week: “we’re thrilled to have Brackles heading up the DJ action. This former Nottingham resident is barely into his twenties but has already released two belting dubstep 12″s – ‘Broken Harp’ on Pollen and ‘Glazed’ on Berkane Sol – and has one forthcoming on Appleblim’s Apple Pips imprint (sometime home to Martyn, Ramadanman, T++ et al).

“Inspired by all the good stuff – Slimzee, Horsepower, Dilla, El-B, MJ Cole – Brackles is probably our favourite DJ around right now, and basically blew our minds last time he played FWD>>. With a sound a million miles away from the blokey, sludgy going rate of dubstep, this kid effortlessly incorporates funky, rolling grime, vintage 2-step and bassline into his impossibly energetic, elastic sets and will, without doubt, tear the Lock Tavern a new roof. Sorry, Lock Tavern.”

Just to prove we weren’t chatting breeze (which, let’s be fair, is hardly like us), his FACT mix is ridiculously good. It features both sides of his forthcoming 12” on Apple Pips, fresh Funky from DJ Mystery and Roska, his ridiculous remix of Tempa T’s ‘Next Hype’ forthcoming on No Hats No Hoods, Untold’s obscene ‘Anaconda’, 03-era grime classics by Youngstar, Alias and Big$hot, and that’s before getting into material from Zomby, Dexplicit, Greena and Brackles’ little brother Martin Kemp.

A full-interview will be up later in the week; for now you’d do well to get on the download below. Brackles is serious, people. Don’t get left behind.

Roska – Gone To A Better Place – Roska Kicks and Snares

Tempz – Next Hype (Brackles Remix) – forthcoming No Hats No Hoods