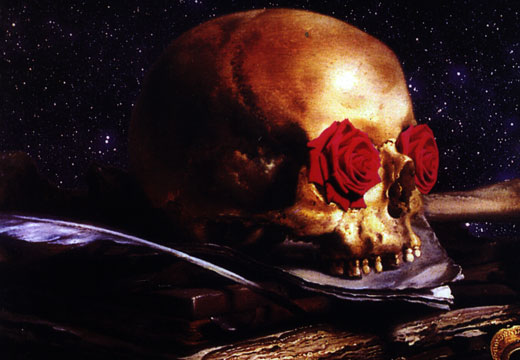 Popular excitement in the notion of post-modernism peaked with Kirk Varnedoe and Adam Gopnik’s High and Low Exhibition at The Museum of Modern Art in New York (1991), Jean Baudrillard’s quasi-coffee table books like Cool Memories (1987), surveys like Charles Jencks’ The Post-Modern Reader (1991) and in the UK with intelligent journalism in magazines like i-D, Melody Maker and The Face. Post-modern art could be crudely but accurately described as a play of signifiers divorced from their original signification, resulting in a jacuzzi of influences which aimed to depict the fracture of established narratives.

On the street it was less interesting that artists, architects and musicians were self-consciously turning their output into a fourth-dimensional collage; more exciting that the resulting work exhibited a daring frisson. Charles Jencks described this divide in the form’s reception (the knowing and the ignorant) as the "dual-coding" of post-modernism. Rubbing Old against New, East against West and most especially popular culture against the highbrow inadvertently burrowed through to a level of more profound truths about people’s experience of life in the world.

The collision between High and Low Art was only made possible by modernism’s rejection of mass culture. The classical avant-garde as embodied by Stravinsky, Picasso and Rimbaud ostensibly rejected mass culture (even when it was reshaping earlier folk art). Contemporary critics celebrating modernism, like Dwight Macdonald and Theodor Adorno, wished to carve out an enclave for the avant-garde in which the likes of Schoenberg and Camus could cavort. Previous to this sanctification of the avant-garde, the so-called Vatican of modernism, the division between High and Low was often less hard and fast. An artist like Andy Warhol was, with Pop Art ("Why do we have to drip?"), explicitly thumbing his nose at high modernism.

Behind this HiLo 20 Best are transparently subjective criteria. I believe these twenty hover, wings beating, at the mythical juncture betwixt the loftiest academic accolade, mass appreciation at street-level, embrace by the fickle fashionistas of the media and sanction by the art establishment. To fall into this hallowed sector is no simple trick, it is easy to flutter too far one way or the other, and miss divinity by a whisker.

Whether, given that modernism as an historical project is now rubble, post-modernism as a strategy is unfeasible is open to debate. Today’s art institutions, with the good grace of their government funding, believe that they have finally ingested and disarmed popular culture. They are able to fend off its threat quite comfortably; grime soirees at the ICA anyone? Part of the power of these records lay in their ability to cause the establishment discomfort. In music today there has grown up a comfortable mediated interzone between High and Low, propped up by Arts Council grants. It tends to produce not a spectacular clash of High and Low, but a bubbling gum-pot of the mediocre.

SYMPHONY NO. 2, conducted by LEONARD BERNSTEIN

America was naturally a haven for the High/Low Aesthetic. A ‘new’ culture bereft of the baggage, which Europeans shouldered, composers like Charles Ives sought to transform its existing musical fabric into a considered art form. Symphony No.2 features trace elements of Massa’s in de Cold Ground, Pig Town Fling, Beulah Land, De Camptown Races, Turkey in the Straw, and Columbia, the Gem of the Ocean along with Brahms’ Third Smphony, Wagner’s Tristan and Walkure, Bach, Bruckner and even Dvorak’s New World Symphony. A gorgeously gentle, remarkably unsentimental piece (when compared to Gershwin’s often cloying incursions on the same territory) it is the square root of (amongst many other works) The Beach Boys’ Smile and Matmos’s The West.

Based on John Gay’s Beggars Opera, Weill’s masterpiece is not set in the Berlin of the Weimar Republic but London’s Soho thus it is close to FACT magazine’s heart. Weill, like Ellington, was a natural talent who never stooped to the pseudo-social engineering of worrying about who he was composing for. Be careful which version of the opera you buy though! The regular classical music circuit usually makes a hatchet job of performing it; the right cast is hard to come by. Even on this practically peerless take by Weill’s wife Lotte Lenya sometimes the chorus isn’t twisted and demi-monde enough sounding. You just can’t get the singers these days!

Bartok was an extremely well respected ethnomusicologist. He made recordings of his native Hungarians, in Romania and Slovakia but also of the Berber tribe of North Africa and the Turks of Anatolia. His was a project of similar breadth and vision to that performed by Jean Jenkins and her recordings in the Arab world. However, he seemed to require some distance from these folk sources in his own compositions, but gradually his resistance to their charms wore away, leaving him finally to compose true "folk symphonies".

In themselves these songs were certainly works of genius, but not Art as such. However in realising that in their ephemerality they were timeless, and in positing their often bizarre content not as Hillbilly vacuity but visionary surrealism, Smith created Art from them. If one is any doubt a brief study of Harry’s astonishing liner notes and endlessly surprising graphics for the Anthology sets one straight.

Duke’s most successful long-form exercise in which he made quite clear to then burgeoning American classical music establishment who was the real Mr. Music! Forget 999 tepid jazz symphonies; this would have been "coming up from beneath" were it not "raining down from above". In Alex Ross’s excellent The Rest Is Noise critic Winthrop Sargeant is quoted expressing to Duke the hope that jazz composers might "rise to classical eminence" to which Ellington replied: "Maybe so, but what a shame!"

Later Beatles LPs make the case more explicit for the Fab Four’s artistic credentials. Here, with a cover of Chuck Berry’s ‘Rock’n’Roll Music’, they seemed to be slyly mocking their own blossoming pretentiousness. For Sale came just after the peak of Beatlemania and its creative success (surely the first good full-length Beatles LP?) must have come as a surprise at the time. However, as is documented in fascinating detail in Ian Macdonald’s Revolution In the Head, classical music critics were quickly tripping over themselves, partly in bewilderment, trying to describe the band’s effortlessly inventive harmonies and melodies.

Almost all of the INA-GRM’s output, with the sole exception of this, Parmegiani’s announcement tone for Roissy Airport and Guy Redolfi’s Pacific Tubular Waves, is unrelenting (if fascinating) high modernism. Bayle invited David Allen (The Soft Machine, Gong) to provide splintering guitar lines, which he tracks with sound recorded at the student riots the previous year.  Post-modern critics understand the events of 1968 as being as devastating for the classical avant-garde as Pop Art. French critic Michel Ragon wrote: "During the events o
f
May and June 1968 Art and Culture no longer seemed to interest anyone. Drawing the unavoidable conclusions, the museum curators closed their cemetaries of culture…the city once again became a centre of games, it rediscovered its creative quality; there instinctively arose a socialisation of art."

Rare are the institutionally-respected composers who look like bikers, smoke copious quantities of opium and whose saxophone playing is feted by Ornette Coleman. La Monte’s musical project was deadly serious though, a timely and highly inventive elaboration of twelve tone serial music, whose immediate progeny The Velvet Underground might just have been the greatest High/Low collision ever. But remember that Andy Warhol did sleeve art for Diana Ross too!

Ono’s work with Fluxus is now reasonably well understood, though there must be people, presumably stranded on small islands in the Pacific, who blame her for The Beatles break-up. Fly is her grooviest record, notable for ‘Don’t Worry, Kyoko (Mummy’s Only Looking for Her Hand in the Snow)’ – a piece of impossible skronk that Lester Bangs included in his legendary list of Horrible Noise. Nobody promised that the music at the High/Low Art interface was going to be easy-listening, quite the contrary in fact.

While Brian Eno’s Music For Airports might be the obvious choice above this as the perfect embodiment of High and Low, that would be to ignore his old band’s cross-media inventiveness. Roxy weren’t just about music; they were interrogating artifice and glamour. As Simon Frith revealed in his landmark study on the interface between the British art school and the music business, Art into Pop, Brian Ferry, pupil of Richard Hamilton’s, had his own resources too.

Branca took to its logical (surgical?) extension the idea that rock could aspire to the bombastic heights of classical music. In retrospect many of the experiments of progressive rock had a temerity and structural insincerity that made their forays into similar territory seem almost kitsch. Robert Longo’s cover is particularly notably as well, responsible as he was for classic post-modern art like 1982’s Master Jazz.

Anderson blew her earnings from ‘O Superman’’s chart success on this marvellously over-the-top, operatic-in-scale live performance. An old girlfriend’s aunt attended and confessed it was an endurance test, some slept, people wandered around aimlessly. I find the album very entertaining.

Just as acid house and hip-hop exploded the possibilities inherent in sampling, Swiss avant-ists The Young Gods were feeding their Akais a collision of Shostakovich and Slayer, positing a fabulous new future for rock which sadly was never pursued. If only record companies, like banks, could be encouraged to lend some of their collateral back to the public, then we might see a sample-friendly future. Till that date it’s a countdown till Girl Talk’s lawsuit.

At the crest of post-modernism’s celebrity many felt that this LP crystallised everything that was positive about the concept. Sampling was the quintessential post-modern musical technique, and although Marley Marl heralded the sampling revolution within hip-hop, and Brian Eno and David Byrne had sampled extensively on 1981’s My Life In the Bush of Ghosts, De La Soul were both more innovative and far-ranging than Marley and more comprehensive and playful than Byrne/Eno. And as their lawsuit with The Turtles proved, the stakes were much higher for them.

Avant-garde-inclined ‘Dead Bassist Phil Lesh, an early associate of Morton Subnotnik’s, asked Plunderphonics artist John Oswald to perform a cut-up of their catalogue. Oswald painstakingly stitched together over a hundred different performances of ‘Dark Star’ made between 1968 and 1993 and turned in the greatest ‘Dead recording ever.

Oval’s aims for this disc were lofty beyond even sound design. They laughed cruelly at journalists who quizzed them as to their influences. However, Popp and crew never topped the gorgeously seductive aquatic gamelan Pop-loop of ‘Do While’.

Gregorian Chant, Beckett, Pasolini; Tilt is seemingly inspired by anything but popular music – this is nevertheless just that.

Alva Noto is audio-visual artist Carsten Nicolai and ‘Prototypes’ is just as loopy and fun as those tube slides in Tate Modern’s Turbine Hall, but more than any other glitch recording it makes merit of elegant formulations of static clicks, machine burbles and pink noise. While you’ll never hear as anything as crass as a tune, these compositions are nevertheless highly accessible in their own way – a rare feat.

THE LEMON OF PINK

In a seemingly ever-contracting field of High/Low endeavour The Books are an increasingly rare phenomenon. In case we ever doubted their credentials they have just completed a recording for the elevator in Paris’s Pompidou Centre; better the lift I suppose than the gallery itself.