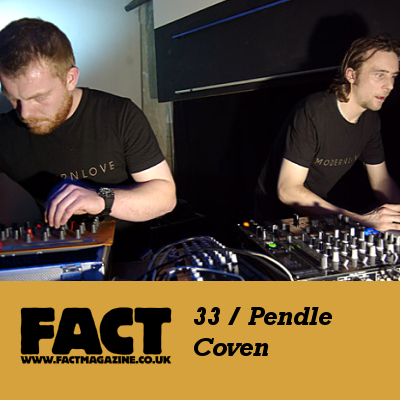 For the unfamiliar, Pendle Coven is the Manchester-based duo of Gary Howell and Miles Whittaker (aka MLZ). Their productions are very much in the dub-techno tradition as established by Basic Channel and Chain Reaction, but imbued with an ineffable Rainy City melancholy and other influences like dubstep, ambient, deep house, ‘ardkore and even drone metal. Their debut album Self-Assessment has just come out on the impeccable Modern Love imprint, collecting their previous singles and a bunch of new tracks, and mighty fine it is too – we suggest you check it out. But not before this mix.

Put together by Miles exclusively for FACT, this nice ‘n raw mix includes killer tracks old and new from Andy Stott, Carl Craig (Tres Demented), Larry Heard and Claro Intelecto among others. For the unititiated it’s the perfect introduction to the Pendle Coven and Modern Love sound; for those already down, well, you know this is going to be essential listening.

Tracklist and Coven Q&A after the jump…

"The mix is a vinyl only mix, featuring some of our favourite records of the last few years, with a few different genres thrown in for good measure."

Who is Pendle Coven? How did you come into being?

"Originally Pendle Coven was just Gary Howell and myself, though we often have other friends guesting anonymously (or just making the brews) on various tracks. We came into being thanks to the good people at Modern Love."

How did you first hook up with the guys from Modern Love and come to release records on their label?

"First and foremost we are friends, that’s how it was when the label started, and how it is to this day. I also worked helping distribute Modern Love when it first started, though now im happily relegated to being ‘just’ an artist!"

From a Londoner’s viewpoint anyway, there seems to be a really healthy dub(step) and techno scene in Manchester, based around Boomkat, Baked Goods, people like yourself and the Modern Love crew. How would you say the music/club scene there have changed over the years? Is it much different now to how  it was 5-10 years ago?

"Wildly different, for a start the whole physical aspect of music is disappearing and evolving into something new, and many label’s and artists are having to re-think their strategy to cope with the new rules. The Northern scene is extremely healthy, there’s plenty of young blood in the promotion field, like Faktion, MeandYou, Sequence, Erosion, who are not only putting on good new artists, but are combining genres with different nights and not sticking to one formula. Backing this scene up with the physical side are the shops/distributors in Manchester, most of whom are long term players in electronic music."

Tell us about your own beginnings and development in music…What did you grow up listening to, when did you start DJing and producing…?

"We both grew up with music from opposite ends of the spectrum, Gary was heavily into metal bands like Soundgarden and Primus, and I came from the Madchester Indie/dance side like New Order and the Stone Roses. I was lucky enough to be around for the tail end of the Northern warehouse scene in 1990 where i instantly fell in love with acid house, which was of course when i started DJ’ing. Gary and I met in 1993, where a shared love for the golden age of electronica, Aphex Twin’s Ambient Works, and Autechre’s Incunabula, for example, inspired us to start producing music."

I guess your name is to do with the Pendle witches. Are you boys big on the occult?

"In a cultural way only. We have both lived in the shadow of Pendle Hill all our lives, and the Witch culture permeats this side of the Pennines, so we took inspiration from that for our name. We also have a monthly event in Manchester titled Haxan, after the 1922 film of the same name, which was the first film to deal with Witchcraft and superstition/ignorance."

Were there any particular people/DJs/producers/records which inspired you to start making music of your own?

"Too many to list, and the list grows each year. Though initially, the aforementioned electronic artists Aphex Twin and Autechre played a major part. Joey Beltram, Larry Heard, Derrick May, 4 Hero, to name a few. Now it’s just as likely to be Sunn 0))), Alice Coltrane, Mika Vainio, Atom TM and many other varying artists who influence us."

What’s the most valuable – be it sentimental or financial – record you own? What five records would you save if, god forbid, your house was burning down?

"That’s a hard question to answer! Most valuable, for financial and sentimental reasons is most probably Robin Wants Revenge on Jungle Jam. This track was on the first tape i ever got after a warehouse party, and it took me 12 years to find an original copy. Worth every penny too.

Do you think there’s a particular style/strain of techno/dub which appeals to people in the North West? There definitely seems to be something rainy, industrial but quite soulful (to wheel out all the Manc cliches!) about your records and others on Modern Love. Is the city an influence on you at all?

"Oh yes, a major influence, Manchester is grey, grimy and post-industrial, thus heavily influences the label and us. Most artists on Modern Love are all Northern based, and hence we are quite close friends, so we are highly influential with each other too, alongside this there’s a healthy dose of friendly competition that doesn’t harm the output either."

Self-Assessment feels like the end of a chapter, with a presumably new one about to begin. What’s next? Any 12"s or other forthcoming releases you can tell us about?

"It is the end of a chapter, but definitely not the book! We have quite a few projects underway at the moment, but these have to be kept under wraps for now until they are finalised. But you can expect a couple of remixes for certain in the near future, and some exciting new 12"s on the Modern Love sister-label Daphne."