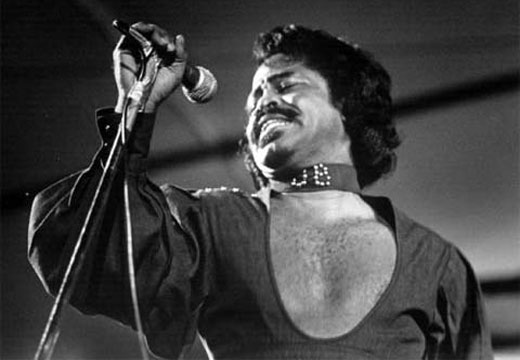 Of all places, it was the John Peel Radio 1 show back in the mid-‘80s where I heard my first proper funk 45. The rare groove scene in London was blossoming and Peel chose to play Alvin Cash’s ‘Keep on Dancing’ amongst the usual selection of Napalm Death, Suicidal Tendencies and (inevitably) The Fall. “How refreshing”, I thought, and my journey into the music of black America began.

In those days funk 45s were viewed almost like novelty records, the odd one sneaking into the DJ record box amongst the more standard fare of LPs and twelve-inches. I remember thinking to myself, “why buy a single 45 for £8, when I can have a whole LP for £8?”

Throughout the ‘70s and ‘80s the Northern Soul dealerships imported American soul 45s en masse. Funk 45s by the likes of Lee Fields, African Music Machine and Eddie Bo etc were hidden among them. Most of these 45s found their way into the collections of the mostly southern-based rare groove collectors and DJs via dealers such as Soul Bowl, Des Parkes, Des Toussaint, Gary Dennis and ‘Pop Beat’ Bernie. Funk 45 collectors as such didn’t really exist – there wasn’t really much of a selection to choose from, there was no network of funk collectors, and too few people cared about them for dealers to seek out new titles.

Then in 1994, DJs Keb Darge and Snowboy started the long-running club night Deep Funk. The club was unique in the fact that it was the only club in the world that exclusively played funk 45s. The collectors soon flocked to the spot where they would find that they were not alone in their love of this music. Knowledge began to be shared, and the heightened interest in the music meant many new discoveries were made. Money is a great motivator, and as the prices began to rise, so more rare records were uncovered. The records in this list are funk 45s (mostly from the period 1969-1971) that have garnered a healthy respect amongst funk DJs and collectors in this time. Out of the millions of 45s out there, here are 20 of the very best.

‘WHAT GOES AROUND COMES AROUND’

Officially the most expensive rare funk 45 on earth, recently fetching a whopping $4293 at auction. A huge price doesn’t always mean it’s a huge tune, but in this case it is.

This one is easy to describe. It’s one of the heaviest, hardest, rarest and best funk 45s ever made, simple as that.

An absolute monster and utterly brilliant. Everything you could want from a funk 45.

The best funk drums ever recorded on this ultra-rare 45? Legend has it that the producer destroyed 99% of the copies rather than hand them over to the local mob.

An amazing piece of music, something you can listen to over and over again and never tire of. The spaced-out guitar effects on Part II kill me every time!

The perfect combination of heavy drums, bass, brass…an awesome record that everybody wants…yet this 45 is incredibly rare. Who were they? Nobody knows…

Probably the best 45 made by this talented and prolific Texas funk outfit.

‘EVERY MAN FOR HIMSELF’

Long ago I think The Meters heard this record, tried to copy the style, but could never quite get there. I’m talking rubbish of course, but my theory does say something about just how good this record is.

Until recently DJ Shadow had the only known copy, much to the envy of everyone who heard him play it – thankfully, some copies have now turned up.

An all-time classic and a big favourite with the breakdancers. Not sure why, perhaps it’s because of the huge drums and massive open break? [Er, probably – Ed]

The Heller brothers played drums and organ together since they were kids, which might explain how they managed to create as near to the perfect organ funk record as you can get.

An incredible wall of sound with rhythms so tight and so complex you just can’t pick it apart. Magnificent!

Featured on a KFC ad a couple of years back. Shame the ad men switched their policy from funk to Northern soul. Mind you, that’s still better than most of the music around these days.

A true classic from New Orleans with the spectacular James Black showing why he is one of the most respected of all the old-school funky drummers.

Any record that starts the B-side with "Everybody we’re through, we’re gonna finish the job / we’re gonna do part two” has got to be good. This one isn’t just ‘good’, it’s brilliant!

Has stood the test of time since being played in the rare groove clubs of the ‘80s. Popular with the ladies, this one.

Out DJing and the dancefloor is a bit tired? Well this record is certain to spice up any ‘floor, anytime. One of the finest femme vox funk 45s.

Any funk 45 Top Twenty has to include Soul Brother Number One. Hardcore funk from JB at his very best. Pisses all over the softcore Polydor version.

‘THERE’S GOT TO BE SOMEONE FOR ME’

Very few known copies on 45. A different version to that on the ‘What it Is’ LP. This has a different mix with added percussion.