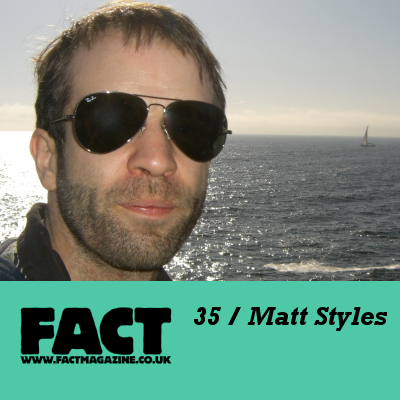 Former manager of the Crosstown Rebels label, Styleswas a key player on London’s house and techno scene before his recentrelocation to Berlin. A true DJ’s DJ, he hosted the infamous Sundaynight party Dig Your Own Rave and co-helmed the acclaimed Get Lostmix CD with Damian Lazarus. Recently he’s been concentrating more onhis own productions – releasing 12"s on BPitch Control, Dinky’sHorizontal imprint and most recently Diamonds & Pearls, sometimehome to Luciano, Ricardo Villalobos, Henrik Schwarz and Soundstream.

His mix for FACT is rather special – eschewing the streamlinedhouse sound he’s most commonly associated with, Styles has insteadopted to deliver what is, in his own words, "a kind of  a proto-houseselection, ’83 hottmixx style". It’s a masterclass in rare disco,boogie and 4×4 entirely culled from the late 70s and early 80s – by thelikes of Willie Hutch, A Certain Ratio and Captain Rapp. And at itscentre is perhaps one of FACT’s favourite tracks of all time: ArthurRussell’s impossibly beautiful and sprawling  ‘In The Light of TheMiracle’.

This is one of the best mixes we’ve yet had the pleasure of hosting, so dig in and enjoy. Tracklisting below.