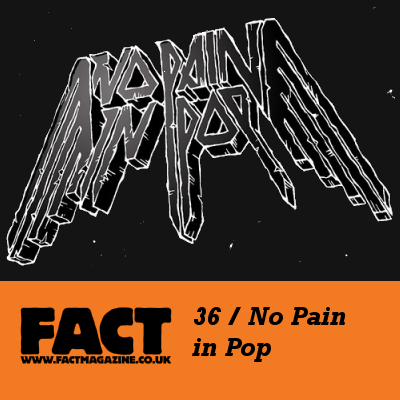 No Pain in Pop really know how to push our buttons. We read their blog, we buy their records, we go to their nights – and each of these things is invariably more rewarding than the closest equivalent. They’re basically total dudes, so we thought we’d give them a shout about doing us a mix.

Anyway, they did it and it turns out they really know how to push our buttons. El-B, Burial, Zomby, Rustie, Ikonika, Mount Kimbie, samples of Skepta shouting – who’d have thought we’d be into that? Tracklisting and Q & A follow the download link.

Who or what is No Pain in Pop?

“No Pain In Pop is a record label, mp3 blog and promoting team from New Cross, South East London.”

“It’s the second in a series of mixes made for the blog by our close associate, Jah Pat. The sampled voice is Skepta, from a show with did in New Cross last year – this video popped up on Myspace a few weeks later.”

Tell us about your new compilation…

“It’s 35 minutes worth of what we believe popular music should be about. It’s partially a review of our activities over the last year – each artists we’ve either released, held a show with, or featured on the blog. It’s also a look forward what we’re doing this year, with debut tracks from a few bands. It’s out on April 4th and you can pre-order it here.”

How does running a blog help or impact upon your other activities (the label, the DJing etc).

“I think it justifies the other aspects of the label to some extent, in that we’re a lot more up to speed with everything going on, and that because of it our name almost becomes a rubber-stamp for decent new music. Also, new bands have started to send their tracks straight to us, which means we can be first to artists that’s worth releasing.”

Tell us more about the label – when and how did you found it, and what’s your experience with it been like so far…?

“We started about a year ago – the first release was a Telepathe and Sunni-Geini split in June 2008, which sold out within a few weeks. Since then we’ve put out Gentle Friendly, Banjo or Freakout and HEALTH. It takes a lot of hard graft but it’s a lot of fun.”

You’re into lots of different kinds of music and artists  – what would you say is the common thread? What do you look for in music?

“Anything that’s fresh, exciting and tries to join dots.”

“We’ve been pals with Banjo or Freakout for what seems like forever. He makes beautiful, glitchy pop loops, and is going to headline. Both opening bands are very exciting – Trailer Trash Tracys make really stark, reverb heavy indie, and A Grave With No Name sound somewhere between Daniel Johnston, Nirvana and Atlas Sound.”

With the maturing of dubstep and the arrival of funky, wonky, blah – London bass music seems to be in rude health right now. Creative guitar music, on the other hand, has ceded a lot of ground to places like Brooklyn and L.A.. Is this a statement you agree with? What are your thoughts on the London/UK music scene at the moment…

“There’s no doubting it’s in good health, but it’s always a bit paradoxical. Dubstep, for example, is obviously in its best commercial health now, but was at its most creative and innovative a few years ago. And I don’t think it’s wise to exaggerate London’s importance – at the moment places like Bristol and Glasgow are equally if not more productive.

“Likewise, Brooklyn has a great crop of bands, and there are pockets of incredible things happening in London, but it’s probably best not to think in terms of music ‘scenes’ anymore. At the end of the day, the intent to make innovative music is always changing between environments – as soon as it stops becoming innovative it’ll evolve and pop up elsewhere.”

What’s next for No Pain in Pop?

“Release wise we’ve the compilation due out on April 6th, and a single with Trailer Trash Tracys on May 18th. We’ll have a few more singles, and perhaps an album, due out by the end of the summer. With the shows, we’ve the compilation launch on April 4th; we’re hosting room 2 at Fabric on Thursday 9th April, with Hudson Mohawke and a few bands playing; and we’ve got stages at the Great Escape and Stag & Dagger festivals, and we’re running the second Nail the Cross in September. And we’re going to carry on posting on the blog. Lots of stuff going on, not enough time…”