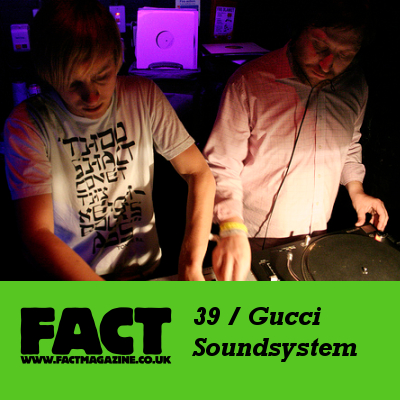 Gucci Soundsystem is the London-based duo of Ben Rymer and Riton. In advance of their appearance at this Thursday’s Disco Bloodbath vs Optimo Warehouse Ball, Ben has recorded a very special mix for FACT, including his own italo edit of the Rambo theme and the world premiere of Shit Robot’s terrific ‘Simple Things’, forthcoming on DFA. Tracklist and a Q&A with your man follow the download link.

Any Time or Place (instrumental) – Azoto

Are you Jeff Vader? –  Creative Use

The Sunlamp Show (The Disco Bloodbath Effect) – The Aliens

Tell us about the mix you’ve recorded for us…

“It’s a party mix I did which has a few Bloodbath anthems on it, plus a few of the Disco Bloodbath remixes ive been doing with them and some stuff from Channel 83 – which is the new label I’m setting up with [Disco Bloodbath’s] Damon Martin.

Any particular personal favourites or exclusives on there?

“The Shit Robot tune, ‘Simple Things’, is a total exclusive and as I’m sure your readers/listeners will agree it’s going to be massive. I’m also really pleased with mine and Damon’s Fern Kinney edit.”

“Me and Henry have got a a really interesting track in the pipeline with Matty from The Rapture playing bass that sounds like a cross between Vangelis and Fela Kuti.”

You’re doing quite a few re-edits these days right?

“I’ve started the Channel 83 label with Damon and we’ve got a bunch of things lined up, both edits and original stuff. Number 1 will be in the stores mid-April…”

What’s the plan for your party this weekend?

“It’s just really exciting to have two genuinely music-driven parties come together on such a big night out. On a personal level I’m warming up for Optimo which is rather nerve-racking but also really exciting. It gives me a lot more musical freedom than most gigs and also license to bust out some ambient dub records I haven’t played since they first came out in 1991.”

Any new bands/labels/producers currently floating your boat that we should look out for?

“Apart from our excitement about Channel 83 I’m really into Nathan Wilkins’ History Clock label which has loads of great-sounding stuff coming out. Band-wise, Moon Unit and The Invisible are doing exciting stuff.”