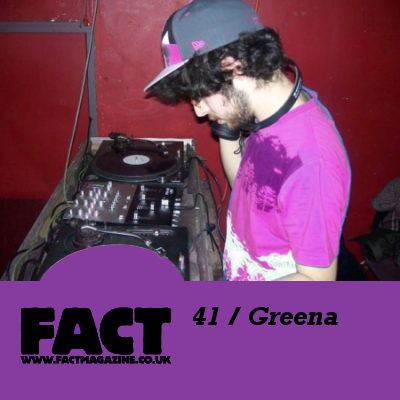 FACT Mix 41 comes from one of the new faces on Appleblim’s Apple Pips label, Greena.

This Friday he’ll be playing alongside Peverelist, Geiom, Brackles and ‘Blim himself at the Arches, and if you haven’t been lucky enough to catch his recent Ableton sets, then this mix should give you an idea of what to expect – Grime, 2-step, Baltimore, UK Funky, hip-hop, house-tinged dubstep, Shackleton type oddities and more rolled into a heavily layered set. We don’t know anyone else in dubstep doing it quite like this.

Tell us about the mix that you’ve recorded for FACT…

“I think the main things I had in mind when putting it together were that I wanted to find a balance between vocal and instrumental tunes and didn’t want to give too much time over to new tunes/dubs. Used a 1210, Ableton and a CDJ so at times its quite layered up…. but equally there’s a few lazy ass 8 bar blends in there too! Sometimes those are the best though…

“I’ve found Spyro, Kode 9, Bok Bok and Rustie’s radio shows/mixes quite inspiring recently cuz they mix up genres in a way that is disorientating without being all over the place. The grey areas between grime, funky, 2-step and so on seem to be the most exciting at the moment so its always a touch to hear DJs taking advantage of the amount of music that garage spawned, or indeed beats that have no relation to London’s musical heritage. So I guess those are the sort of DJs who have had an influence on me lately.”

What have you grown up listening to? You’re quite influenced by Drexicya and other Detroit electro/techno, right?

“Well… yeah I really rate Drexciya, some of their music is timeless, no doubt about it. So much music from Detroit is amazing, be it Slum Village, Juan Atkins or Theo Parrish. It’s probably the only other city besides London that is always producing music that appeals to me. I got really into all that sort of stuff quite young, long before I could go to clubs, so I’m sure it has some sort of bearing on what i’m doing.

“I think the music coming out of London from 2004-2006 was what made me want to produce/DJ seriously. Seeing Kode 9, Plasticman and Digital Mystikz play out then was too much. The fact you had consistently amazing records by Shackleton, Mala, Kodes, Skream and Burial sitting in one small rack in record stores with little filler/waste 12″s was quite special, its the only time I’ve bought records without even hearing them!

“Of course grime was going really strong back then (not that I’m saying it’s no longer relevant, still some amazing MCs, producers and DJs about) both in terms of instrumental stuff and vocal tunes. Wiley’s synths on his early tunes are still amongst my favourite sounds on anything really. Still listen to a lot of radio sets from then. I’ve never really understood why more people don’t mix grime and dubstep together, it’s such a perfect match. The fact that all this music was coming out from London is what was most inspiring though, there was always something to go to, records to buy, people to speak to… that was what sucked me in.”

Any past or forthcoming releases from you that we should look out for?

“Yeah a 12″ is coming out on Apple Pips soonish, couple of months probably. I’ve got other stuff that i’m preparing for release but don’t really want to say anything till it’s finished.”

How did you first hook up with Laurie/Apple Pips?

“Just from going to FWD really, I was speaking to ‘Blim about all sorts of music that fell outside of the pirate radio sort of sound and mentioned that I’d just made some slightly weird tracks at 140bpm, sent them to him, he cut the first few, and that was that really. Laurie is probably one of the biggest music heads I know, he was so into his vinyl at one point that he got a job at a second hand record store just to get first dibs on what came in. So he’s great to work with because he’s open to pretty much anything really.”

Any other up-and-coming producers you reckon we should look out for?

Anything else we should know?

“The Uape Indians, who live in the Amazon, mix the ashes of their recently cremated relatives with alcohol, then all members of the family drink the mix with fond memories of the deceased. Big.”

Greena, Appleblim, Peverelist, Geiom and Brackles will be playing at A Bunch of Cuts at The Arches this Friday, Apr 17.