Nadja: When I See The Sun Always Shines On TV 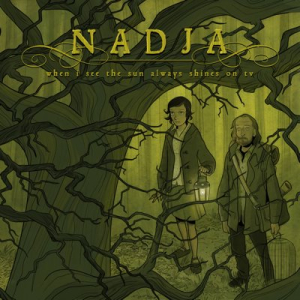 I like Nadja, but I was all ready to not like this. Firstly, because as good as Nadja are, they release a lot of material – a fair amount of it completely inessential – and there was a period where every Pitchfork drone was banging on about ‘metal-gaze’ (read: post-Neurosis doom metal that had bits that sounded like My Bloody Valentine) like it was a new thing, and snapping up every bit of music that fell under that description. There’s nothing worse than metal – a genre so reliant on its opposition to hipster culture – gone trendy, and Nadja fell victim to their own success in those spheres. And secondly, because if ever there’s a Nadja release that looked like it would fall under inessential, it’s a covers album with the worst sleeve in the world.

Except When I See The Sun is actually pretty good. The cover of MBV’s ‘Only Shallow’ that opens it isn’t great – it’s such a blindingly obvious choice for the band to cover that it’s almost not worth it, and they feel too in thrall to the original to actually change anything, so they just add a bit of crunch and echo instead. Their take on Codiene’s ‘Pea’ is a lot braver, especially as the album’s second track. It’s the most mournful thing on here – Aidan Baker’s vocals rising above loping waves of guitar that start heavily distorted but clean up over the song’s course, leaving them maudlin and exposed.

But my word, the two that follow it. ‘No Cure for the Lonely’, originally a bonus track only available on the CD release of Swans’ classic Love Of Life, is so good that you’d have to be Dan Black to make a cover sound bad, but Nadja do it firm justice – reinterpreting a brief anomaly in Swans discography (the original was acoustic and brief, in opposition to much of the bands’ oeuvre) into a squealing, glacial epic in the vein of Jesu’s ‘Silver’. Then they take Slayer’s ‘Black Skin Mask’ and extend it into a ten-minute epic closer to Metallica’s more considered prime than Slayer’s primal thrash.

The second half of the album is dedicated to cover versions of things you wouldn’t expect Nadja to cover – ‘The Sun Always Shines on TV’, for instance – and this should be disastrous; a Dizzee covering the Ting Tings moment of shame, but again, it’s not. Slightly po-faced metal bands covering stuff like this is always preferable to dickheads on the Radio 1 Live Lounge ‘polishing turds’, but more than anything these songs sound so composed, so well made, that they’re impossible to dislike – no matter how much you might want to.