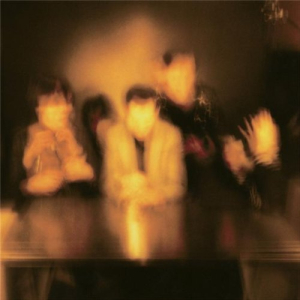 From Vice to The Quietus, The Horrors’ sophomore album has been hyped as one of the stand-out contenders to date for 2009’s album of the year. But really, the way in which the press and countless musical has-beens are shoving this band down our throats is reprehensible, and exemplifies the Emperor’s New Clothes-domino effect that The Horrors’ well-oiled PR machine has whipped up once again. The hook employed this time is that Primary Colours is light years ahead of their first album, Strange House, which was, apparently, rubbish. For the most part though, Strange House received positive coverage. Of course, there’d be nothing to hang a review on or for neckless freaks like Hank Rollins to squeal “dude, it rocks!” without this Maoist denial of the past.

The blogosphere has been awash with ‘fans’ testifying as to the innovative nature of the Horrors’ assimilation of shoegaze into their Munsters schtick. Shoegaze: the sound of electric guitars put through effects pedals. Groundbreaking stuff. It was the sound of the future in 1990, it’s still the sound of the future and The Horrors, vehement Modernists that they are, are at the vanguard of it. Certainly, Primary Colours pushes their knowing referencing of music forward a few years. The opening moments of ‘Mirror’s Image’ are pleasant: delicately oscillating synths and micro-house pulse. It fades into banal Bauhaus-lite the minute Farris Badwan opens his mouth. Here is a man striving for the bruised soulfulness of Robert Smith and failing miserably.

As for the much vaunted sonic environs that couch his croon? ‘Sea Within A Sea’ is about as Krautrock as my mother, akin to The Knack’s ‘My Sharona’ at the wrong speed with a bit of Yazoo throw in at the end. But, unfortunately, nowhere near as good as that sounds on paper. ‘Do You Remember’ could be a sixth-form covers band having a crack at ‘She’s So High’ by Blur. ‘Three Decades’ is farcical, the sound of Coffin Joe trying to keep in time to a Slowdive-go-goth number. Methinks he won’t be challenging the brothers Dinger in the Great Krautrock Drummers stakes any time soon, contrary to what you might have read elsewhere. Speaking of unintentionally hilarious, check out the spoken word bit of ‘Who Can Say’ wherein Farris alludes to one of Bob Geldof’s daughters over an Inspiral Carpets b-side.

Primary Colours is fine enough as an entry point into Loveless or Pyschocandy or The Perfect Prescription. It contains some fine songs, but songs that are so explicitly – cynically – in thrall to touchstones of the late 80s and beyond that they’re impossible to respect, or even take seriously amongst the fawning of intelligent men and women who should know better holding it up as a the greatest piece of art since Michelangelo took a look at the Sistine Chapel’s ceiling and decided it needed a lick of paint. On those terms, Primary Colours falls harder than it deserves and the Horrors remain a pretentious, vacuous proposition: landfill indie rock with some synth burbles. Big fuckin’ whoop.