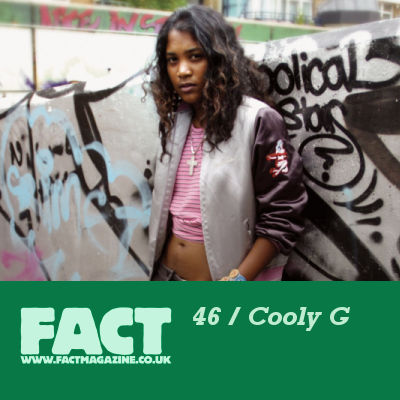 The 46th FACT podcast comes from Hyperdub-signed UK house touchstone Cooly G. Here’s what we said about Cooly when we first profiled her in January:

“Cooly G, who’s a semi-pro female footballer and UK house producer from Brixton, South London, describes her sound as having a “deep house tribal dubstep vibe”, and you can see why – where as Roska or Crazi Cousinz operate firmly (or is that fruitily?) in the Funky end of the Funky/UK house spectrum, and Lil Silva and Hard House Banton are jump-up grime in all but name, Cooly G’s productions exist in their own hinterland – abstract post-garage beats that slowly shuffle into life, and favour cut up vocal snippets to RnB ballads.

“Peverelist has spoke about wanting to “cut out all traces of the human” from his productions, but for my money, Cooly’s current productions are even more robotic and challenging than the Punch Drunk boss’s – without feeling rigid like Geeneus’s more trad housey tracks can at times. They’re never going to get a reaction like ‘Do You Mind’ on a dancefloor (at least not yet), but so long as tracks like ‘Weak’ and the New Cooly Dubplate on her myspace get the plays they deserve (and it seems that she’s being pushed by Marcus Nasty) then they could trigger interesting developments in Funky.

“Cooly G is possibly the dance producer to watch this year, not just for her own tracks but to see how Funky DJs incorporate her unique shuffling groove into their sets, what new styles could spawn from these records getting popular, and especially what hybrids could spawn if DJs from other genres – someone like TRG, for instance, you could see playing her – adopt her tunes as their own.”

Since we wrote that, Cooly’s rep and productions have gone from strength to strength – ‘Love Dub’, and ‘Dis Boy Pt 4, are two of the tracks of the year so far, and shortly after that piece was published it was announced that ‘Love Dub’ would be released on Kode 9’s Hyperdub label, confirming the crossover potential. Both ‘Love Dub’ and ‘Dis Boy Pt 4’ appear on Cooly’s immaculate, heavy FACT mix, along with Fuzzy Logik, Fingaprint, Martin Kemp, DJ Gregory, Dennis Ferrer and more.