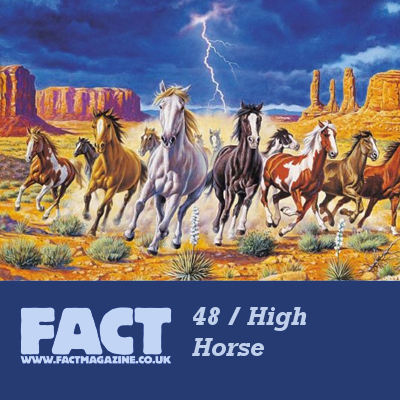 Our 48th FACT podcast – one of our favourites to date – is the work of Benedict Bull, a young man of almost disturbingly good taste and one of the four-strong High Horse crew whose weekly residency at London’s T Bar kicks off this Friday.

Ben is also one half of seasoned ‘floor-smashers Skull Juice, but High Horse, the night he curates with Matt Walsh, Casper C and Alex Egan, is more concerned with showcasing the “deeper, techier” sides of the trio’s formidable record collections. Being the same three on-it types who throw the enduringly popular Bloggers’ Delight parties, Casper, Alex and Ben are no strangers to heavier, bolshier rave fare, but High Horse finds them exploring sounds more trippy, more delicate, more graceful.

That’s not to say their sets don’t bang: for all the subliminal qualities of the tracks contained on Ben’s masterful FACT mix, the focus is firmly on movement and momentum; High Horse aims straight for the dancefloor’s pleasure-centre. From the submerged dub-techno of Haventepe to the percussive minimalism of Maurizio and Ostgut-Ton’s Nick Hoppner, via the deep house modulations of Brothers’ Vibe and Markus Fix, FACT Mix 48 is a hypnotic but totally immediate survey of some of the more creative, rewarding 4/4 music to have emerged in the past year. There are some old classics thrown in as well, like Plez’s ‘Thing For You’ (Factory Mix) and G-Man’s absolutely ballistic ‘Quo Vadis’. Extra props too for including FACT’s favourite house tune of recent times, the heavy-rolling ‘Untitled’ by Slowhouse. Everything on there has been specially remastered by Ben, giving the mix a distinctively crisp, punchy quality. It’s essential listening, y’all.