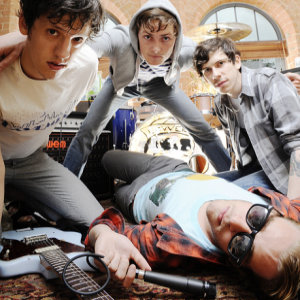 A lot of people went nuts over Nottingham punk quartet Lovvers last year, based loosely on their live reputation and an alright thirteen minute EP called Think. Think had some good ideas, some catchy riffs and deep-mixed vocals, but ultimately there were a lot of bands, both from Britain and the States, who did a very similar thing much better, so I forgot about it pretty quickly.

Anyway, now they’re back with a new album, called OCD GO GO GO GIRLS. This is the first single from it, titled ‘OCD GO GO GIRLS’ (two GOs, not three). The vocals are still heavily distorted, playing back-up to the guitar lines that provide the foundation to the Lovvers sound, but here they feel more care-free – in fact, the whole thing’s a lot of fun, and much closer to the Devil Dogs or Exploding Hearts than the Scratch Acid-lite vibe you got from some of Think. It’s fairly short, it’s fairly catchy, it’s nowhere near as memorable as I want it to be, but over the course of a full length album it might prove very welcome. Let’s see.