JERK at the South London Gallery 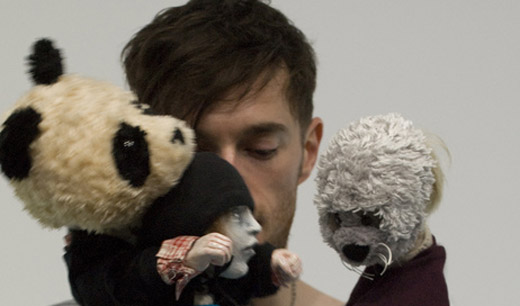 Next month the South London Gallery hosts three performances of JERK, a show directed and choreographed by Gisèle Vienne.

One of the best albums to be released last year was Peter Rehberg’s Works for GV 2004-2008. Rehberg is a hugely respected musician and sound-artist, best known for his collaborations with Sunn O))’s Stephen O’Malley as KTL and for running the Mego (now Editions Mego) label, home to releases by the likes of Fennesz, Hecker and Jim O’Rourke. Works for GV compiled his soundtrack work – which ranges from tremulous, melodic neo-classical patterns via tonal abstraction and ambient to the doomy drone aesthetic which will be familiar to KTL fans – for Gisèle Vienne, whose mastery of puppetry and desire to map out the darker recesses of the human imagination make unusual, often shocking and always drily amusing performance pieces. Some of Vienne’s most successful work has been made in collaboration with cult US author Dennis Cooper (My Loose Thread), who prepares texts especially for her shows, and then reads them aloud in his none-more-laconic drawl.

One such collaborative piece is JERK, which we’re pleased to report is being staged at the South London Gallery on July 1, 2 and 3. Vienne and Cooper have worked closely with actor/performer Jonathan Capdevielle to bring this 52-minute performance to live. With original music by Rehberg, and styling by Stephen O’Malley and Jean-Luc Verna, this is sure to be a remarkable event. We’ll let the SLG explain more:

"JERK is an imaginary reconstruction – strange, poetic, funny and sombre – of the crimes perpetrated by American serial killer Dean Corll who, with the help of teenagers David Brooks and Wayne Henley, killed more than twenty boys in the state of Texas during the 1970s. Written by Dennis Cooper, the text is here re-staged as a solo performance for puppeteer, using glove puppets and playing the role of the con artist, David Brooks.

Serving his life sentence in prison, Brooks learns the art of puppetry, which enables him to face up to his responsibility as an accomplice to the crimes. He creates a show that reconstructs the murders committed by Dean Corll using puppets and ventriloquism for each role. He performs his show in prison in front of a class of psychology students from a local university. The brutality and humour of the text brings a fierceness to the performance which merges sexuality and violence

This presentation of JERK is followed by a special reading of excerpts of ‘Ugly Man’, Dennis Cooper’s latest collection of short stories. The evening of 1 July also features a discussion with Gisèle Vienne and Dennis Cooper chaired by director Chris Goode.

This event is included in Paris Calling 2009, a Franco-British season of performing arts. There are three performances, on July 1, 2 and 3. For more information and tickets, visit southlondongallery.org