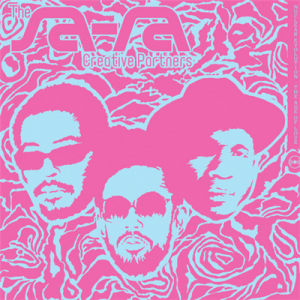 It’s been a long journey for Sa-Ra. Prevalent producers and remixers since the late 90s, they released a lukewarmly-received compilation of their work to date in 2007’s The Hollywood Recordings. Since then they’ve been dropped by their label, ridiculed by South Park on the infamous ‘Gay Fish’ episode, signed to Kanye West’s G.O.O.D. Music label and been dropped again (seems to be a recurring theme here) and had member Taz Arnold start a fashion range and related "manifesto". On the plus side, they’ve signed to California’s Ubiquity Records and successfully aided recent records from Mos Def, Jill Scott, Mark Pritchard and Erykah Badu.

Nuclear Evolution: The Age Of Love sees Om’Mas Keith, Shafiq Husayn and Taz Arnold finally realise their potential as musicians by carefully blending funk, soul, jazz and electro, finally creating a Sa-Ra full-length with the same quality of production they’ve provided to others. Album opener ‘Spacefruit’ is the sort of intergalactic soul their last album didn’t feature enough of, while ‘Traffika’ shows they can go raw: setting a back-to-basics hip-hop production against heavy-hitting verses about drugs, prostitution and abandonment in the big city. ‘Dirty Beauty’ sees Eryakh Badu return the favour for Sa-Ra’s contribution to last year’s New Amerikah Part 1, while ‘Love Czars’ takes you on a chilled journey through a soul-drenched L.A sunset. It’s also welcome to hear J*Davey, part of a new generation of genre-hopping West Coasters, feature on bonus tracks ‘Death of a Star’ and ‘Just Like a Baby’.

A syrup-thick amalgamation of styles that recalls Stones Throw and Outkast as well as saturated soul ‘n’ bass hybrids like Joker’s ’80s’ and ‘Retro Racer’, The Age of Love is an excellent record; one perfect for summer afternoons, and a skilled honing of Sa-Ra’s aesthetic and personality to the album format.