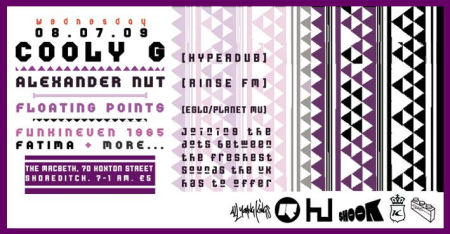 Wednesday 8 July sees the launch of Rinse FM DJ Alexander Nut‘s new night at the Macbeth, Hoxton Square, London. "Joining the dots between the freshest sounds the UK has to offer", the night will kick off with a headline set from UK house golden girl Cooly G, fresh from a new 12" on Hyperdub, a pair of CD releases and on a wave of hype from her performances at nights like Baller’s Social, TACTiLE and FACT’s residency at the Lock Tavern.  Support comes from Floating Points, Nut’s right hand man in Eglo Records and a beat scientist (we mean that – he’s literally a scientist) whose blend of disco, house and hip-hop has seen him courted by labels like Planet Mu. Nut himself will also be DJing, and there’ll be a live PA from Fatima, the first lady of his Eglo label.  Admission is free before 9pm, £5 after, and there’s Function One sound.