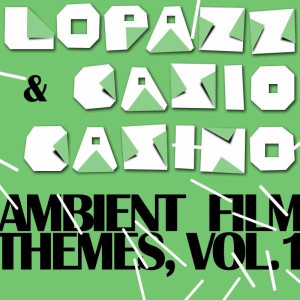 One of the great "lost" albums of this decade is Lopazz’s 18 Themes: Music For TV-Documentaries. Released in 2003 on his own 800 Achtspur label, for it me it remains the best thing this prolific, rangy Heidelberg and Berlin-based artist – real name Stefan Eichinger – has ever put his name to.

His first "proper" artist album, Kook Kook, released on Get Physical a couple of years back, didn’t really do it for me – it sounded too mannered, too unsure what it wanted to be. Now Physical bring us Lopazz’s Ambient Film Themes Vol.1, essentially the sequel to 18 Themes. As the title would suggest, it’s comprised of short, chilled-out soundtrack works – which Eichinger created in collaboration with his long-time studio partner Steffen ‘Casio Casino’ Neuert. The pieces span 10 years, and vary hugely; what links them is the evident playfulness that’s gone into their composition and execution. The opening ‘Koguryo’ sets the slouchy tone – languid trip-hop with faintly jazzy keys, while the almost easy-listening ‘Foodhunter Funk’ and ‘Foodhunter Theme’ have an agreeable spage age bachelor-pad vibe going on. I was particularly taken with ‘Perfume Hunter, Pt.1’, which mixes up melancholic synth-strings and plangently plucked acoustic guitars.

For me Lopazz is at his best when he’s most reflective, as on ‘Lipari Island’ and ‘Perfume Lab’, all loping double-bass and echo-drenched keyboard tones. ‘Orchon-Valley’ reminds us of the producer’s dancefloor credentials, as marimba tones rub up against a low-slung drum tattoo. ‘Pjongjang”s open-hearted piano lyricism is a joy to behold, while closing track ‘Uzbekish Sand’ is genuinely evocative of shifting sands and vast open spaces.

If there’s a criticism to Ambient Themes Vol.1, it’s its sketchy quality – some of the tracks feel like ideas for bigger pieces waiting to be developed, rather than clear and complete statements in themselves. Also, there’s nothing particularly challenging about these songs – it’s debatable whether they have much power beyond that of prettiness and functionality. Still, Ambient Themes Vol.1 is a thoroughly diverting, occasionally ravishing listen; plenty for Lopazz fans and connoisseurs of "discreet music" to get their teeth into.