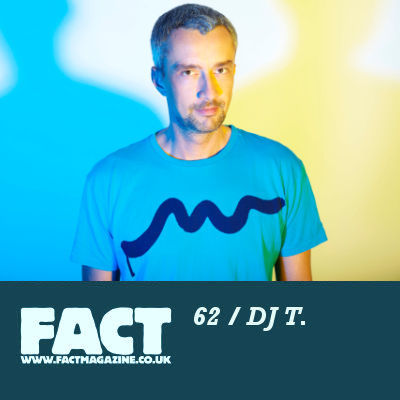 Featuring Kiki, Motor City Drum Ensemble, John Daly and more, it’s a marathon at two and a half hours – the longest mix we’ve had to date. It also comes on the verge of his second full-length album, The Inner Jukebox. For more on T.’s journey to The Inner Jukebox, the makings of his FACT mix and where his label’s going, read the interview after the download link and tracklisting.

DJ T! Tell us about the mix you’ve recorded for FACT…

"Firstly, I’ve got to say that over the last few years I haven’t been the biggest ‘mix maker’. I was rather lazy to start with and at the same time had the feeling that the tracks I was putting in the mixes were starting to wear off on me because I was hearing them so often. However over the last few weeks, everything has started to turn around. The work I’ve been doing on this and many other podcasts has been great fun and has totally inspired me and the feedback has resulted in me feeling a musical enrichment and expansion.

"When choosing the tracks for the FACT podcast it was less to do with the functionality of the grooves and beats in the foreground and more to do with emotions and the statements being made by the music. At the same time it struck me that there was an unusual amount of vocal tracks around that really spoke to me, not just with short-cut vocal samples but with proper songs. This meant that I got a few key experiences using vocals. All this lead me to realise that I was entering another musical phase and that my R&B roots were starting to break through again, something that I find quite exciting. The podcast for FACT was the first of them all and at two and half hours long it will be the longest. I’ve been listening to it in the day while I’m working and its one of the most accomplished and emotional mixes that I’ve ever done."

Tell us about the origins of The Inner Jukebox. When did you begin work on it? There were a couple of false starts, right?

"Originally I wanted to have the album completed two years ago with Walter from Booka Shade. The plan all went down the drain because Walter didn’t have enough time due to the success of Booka Shade. That was the beginning of the two year odyssey, in which time I worked with many good people, among others, Matthias Tanzmann und Ian Pooley. Out of this came a few good releases for Get Physical, Kindisch and Pokerflat that I was really satisfied with, but for many different reasons, a whole album just wasn’t possible. However I think that all of this was really important because working with all these different people I got to see all the different ways they work and learnt a lot from this. I really hope to work with some of those guys again in the future."

This album finds you embracing the spirit of 90s house music, right? Tell me a bit about the differences – sonic, conceptual – between Boogie Playground and The Inner Jukebox.

"The first album was a bit like a retro grocery, a loving homage to everything musical that had influenced me in my childhood and youth. I wanted the sound of the second album to be more ‘here and now’ and it was guided by my definition of house in 2009. Many would probably rather say that it was tech-house but for me it all falls under house.

"The fact that I’ve cited classical elements from the 90s in The Inner Jukebox isn’t really a contradiction because everything comes back from from time to time. However I don’t want to over-value the elements from the 90s that have been influences. I have focused myself less on specific artists and more on the feelings and atmospheres that I connect with previous different types of earlier house. For example, one title such as ‘Shine On’ is comparable to that of Dylan Hermelijn aka 2000 and One’s last album in a definite epoch of Benelux-house. I also wanted to split both ways, by creating a club album and one that you could listen to at home or in the car. Whether I have managed to achieve this, I’ll let the listener decide!"

You recorded the album with Thomas Schumacher. Tell me a bit about your working relationship with him. How did you meet? Why did you want to work together? What did he bring to the project?

"We first got together late last summer in the studio because we both wanted to produce a track for the 100th anniversary release on Get Physical. Straight from the start we had a great chemistry and we both realised that although we had come from very different musical backgrounds there was a big overlap in what we were playing in our sets."

Was making The Inner Jukebox a difficult process, or did it happen quite naturally?

"Yes and no. It was a tricky road with many big and small adjustments to be made and crisis to overcome until we had the feeling that we had a good workflow and felt safe to work on the parameters of our sound aesthetic. Once this was sorted we didn’t have to worry anymore. After we had overcome these rather pragmatic hurdles, the music just began to flow naturally in a clear direction despite little planning and being quite spontaneous. The final phase was almost euphoric and we both came out of it feeling very inspired."

What are your plans for the rest of 2009? Any forthcoming single releases/remixes you can tell us about?

"Until the end of summer there is the album launch and the three singles being released. Each singles features exclusive B-sides and remixes that are not on the album. Maybe if I’ve got the time I will produce one or two releases for other labels. The beginning of July marks the start of my first world tour that will last for six months. The first half will mainly concentrate on Europe and the second half I will tour four other continents without flying back to Berlin in the meantime. I’m really looking forward to it. You will be able to read about what I experience on the internet. Throughout the whole tour I will be keeping a DJ Diary that will have weekly reports on my trip and it will be posted on Beatportal."

The Inner Jukebox is out now on Get Physical.