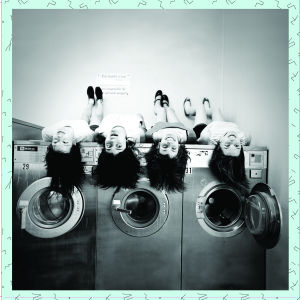 Hailing from the dirty south – Austin, Texas – Finally Punk are an all-girl punk four piece who come approved by Bikini Kill’s Tobi Vail, and who take the early 90s Riot Grrl blueprint practiced by BK et al, and use it as a basis from which to hurl discordant riffs, petulant screams and adolescent anger at an unsuspecting audience.

Comprising 26 songs in 30 minutes, Casual Goths is an energetic listen that never runs out of steam. The simplicity of the album’s language works in its favour, giving the lyrics an emotional intensity often lacking from disconnected contemporary punk – see the appropriately titled ‘5 Year Angst’ and its refrain of "I wanna go outside / Jumping, jumping on the bed / There’s no party here". Playful and witty, ‘Boyfriend Application’ is a list of questions to ask a prospective lover, while ‘Penguin’ with its squeaky noises – as if made by a glove puppet – captures the irreverence and self conscious silliness of the older 90s groups.

To draw allusions of any band to the Riot Grrl movement you inevitably run into the F-word – feminism – and while that somehow puts certain audiences off, we should remember that these bands were about female empowerment rather than hatred of men. In fact Finally Punk play with those expectations: ‘Dear Diary, Men Are Pigs’ is hardly the diatribe one might expect, but one of casual indifference: "every time you walk away I’m just left surprised". Musically Casual Goths seems shambolic on the surface, but behind the riotous guitars and anti-pop sensibility lie some great tunes, and the sound of a promising band who already seem in full control of what they’re doing and where they’re going.