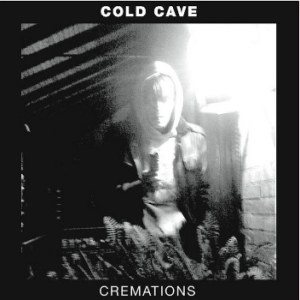 Cold Cave was recently recommended to me via a comparison with Prurient, a.k.a super-prolific (aren’t they all?) one-man black metal machine Ian Dominick Fernow. To be honest, the only Prurient album I’ve heard is last year’s Black Post Society, and I wasn’t into it – give me Wrnlrd or Leviathan any day. I’m probably missing out, but life’s too short.

Anyway, Cold Cave’s the current focus of Wesley Eisold, a former member of XO Skeletons as well as Brooklyn hardcore act Give Up The Ghost, who you might know from a 2007 court case where matey from Fall Out Boy took enough time out from spray-painting his hair and talking Ashley Simpson into a nose job to plagiarize their lyrics, resulting in an out of court settlement. Cremations isn’t quite Cold Cave’s debut album – that’s still to come – but it’s a compilation of demos and early material that recently came out on Hospital Productions, and it flows as well as any album you’ll hear this year, full of sheets of white noise, distorted vocals and cryptic lyrics about death and a lady called Mary.

‘Heavenly Metals’ is the most memorable thing on Cremations, taking the form of a basic 4×4 synth-pop loop with Eisold performing a monologue about android snipers, Hell, the ancients, Door 23, intravenous injections of heavenly metals, and ‘uppers, downers and all-arounders’. Fuck knows what what the big picture of it all is, but with every listen you seem to pick up a little bit more, and by 2011 I’ll probably have figured it out. ‘Til then, I’ll just have to stay content with the line “it’s not my dream anymore…it’s ours” making me want to well up, and look forward to the Cold Cave album more than any other release this year.