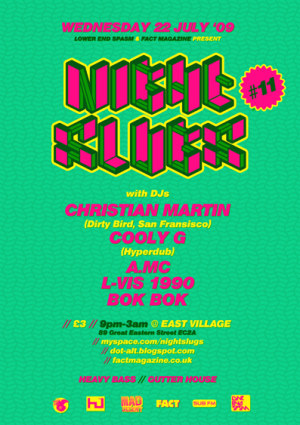 Who’s up for another Night Slugs summer special on July 22? Yeah, thought so.

FACT magazine and Lower End Spasm present number 11 in the chronology of London’s premier gutter house and heavy bass night, headlined by Christian Martin. Night Slugs has recently been explicit about exploring the uncharted territory between dubstep, garage and house, and the Dirtybird crew that Martin – along with Claude VonStroke – is a part of, represent a pretty major X on that map; ask the likes of Crazy Cousinz and Joker, who’ve both been including VonStroke’s classic ‘Who’s Afraid of Detroit?’ in their recent sets.

In support is Cooly G. It’s at that point now; you know Cooly, we know Cooly – she’s one of the UK house scene’s brightest stars, and her diverse sets that take in everything from Martin Kemp to Dennis Ferrer are as suited to strictly UK funky or deep house nights as they are genre-crossing ones like Night Slugs, Ballers’ Social or FACT’s residencies. Oh, and considering how prolific this girl is, you can arrive expecting tons of new material.

Support comes from always-brilliant residents Bok Bok and L-Vis 1990, plus A.MC. Entry is free until 10, £3 afterwards, and as usual, it all takes place at East Village, Great Eastern St. For more information, click here.