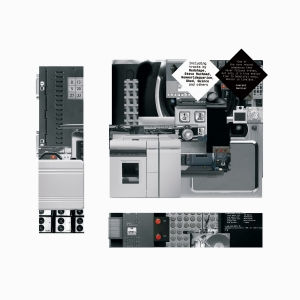 Faced with this behemoth of a compilation, stretched over 2 CDs, it’s pretty difficult to argue with the fact that Marsel Van Der Wielen’s Delsin is one of the best, if not the best, techno label in the world right now. I freely admit that the label’s early output passed me by, but this release, featuring productions from the last three or so years by mainstays such as Newworldaquarium, Yoav B, Redshape, Shed and Steve Rachmad alongside less well-known artists like Delta Funktionen, Van Der Wielen’s own Peel Seamus project and Taho, is proof of a real strength in depth.

There’s no doubting the influence of Detroit on the majority of tracks here – most notably in the melodic sheen of Quince – but unlike a lot of other techno that seeks to emulate the Motor City, the artists gathered here appear to draw inspiration indirectly – check Redshape’s quixotic ‘Steam’ and the battering rhythms of Yoav B’s "Organ Satta; it’s somewhat saddening to hear that the latter been quiet on the production front of late. Although he doesn’t quite chart the heights of ‘My Secret Lifes with Machines’, Steve Rachmad’s ‘Rond’ and ‘Bot’ are quality hypnotic techno, and to my mind the best artist on the label, Jochem Peteri, aka Newworldaquarium, comes up with a majestic slice of glacial deep house in the form of ‘Twenty’.

To be fair, the second CD doesn’t quite match the first, and for me the contributions of Vince Watson typify the sort of anodyne techno that’s so commonplace these days, but there are great tracks from the much underrated D5, some briliantly off-kilter work from Shed, and a beautiful record from Chymera near the end. It’s trancey, melodic techno, and rendered with sufficient nous to make you forget that Detroit Techno actually peaked nearly 20 years ago.

Holland has long been a centre of quality techno, and it’s a real shame that many in Europe seem to forget this. Alongside Clone, Bunker, Rush Hour and Creme, Delsin rightly takes its place in the upper pantheon of independent record labels, and this compilation only serves to enhance their already solid reputation. For an insight into leftfield techno in 2009, this compilation is essential.