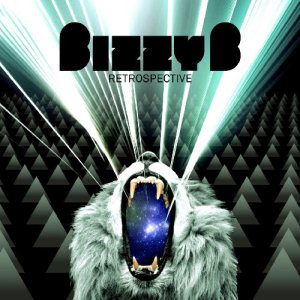 My mate listened to Bizzy B’s Retrospective before I did and likened it to the noise music Noel Fielding’s character in Nathan Barley plays at Dan Ashcroft’s flat. He was at work, had accidentally overdosed on coffee and painkillers and this was the soundtrack to his meltdown. Ideally I’d suggest checking Bizzy B’s dark business out in a different setting. Perhaps under the cover of night, standing in a car park wearing an altern8-style rave mask while tooting on a Pritt Stick. It’s a deviant strain of hardcore which is as ruff as it is tuff and not a soundtrack to creating spreadsheets.

Bizzy a.k.a Brian Johnson was a pretty big cheese in the hardcore raves of the early nineties, holding the scene’s grizzly mitt while introducing it to jungle and watching the gnarly, musical sparks fly. Home of electronic badness Planet Mu supply the aural Tardis here, taking you back in time with a brutal assault of dancefloor monsters. ‘Bad Boy’ and the ridiculously ill-titled ‘Slow Jam’ are prime examples: manically spliced samples rubbed up against ear drum threatening beats backed-up by sinister basslines big enough to kill a man. Despite the hyper kinetic ball outs and rave hoovers, there’s plenty on Retrospective to love and it’s easy to see why the Bizzle is held in such high regard. A veteran of pirate radio, the man’s been responsible for launching the careers of Peshay, DJ Zinc, and Marc Caro (aka Technical Itch) whilst pushing his own breathlessly hard business.

If you’re vibing off the new bass-bin botherers on the block, the resurgence of MJ Cole and Zinc or the parties Night Slugs or Bang Face are throwing then you need this in your ears. This retrospective is a noisy snapshot of where it all began. Bizzy B is the original nuttah. Badman.