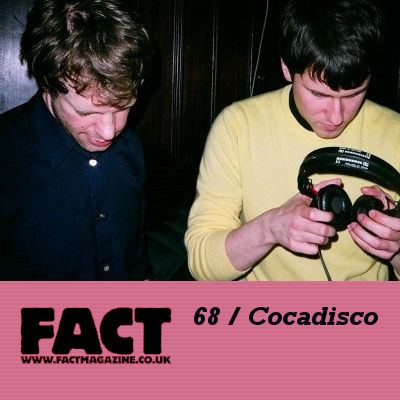 Our 68th exclusive FACT mix is the work of Piers Martin and Rodaidh McDonald, the brains behind Cocadisco.

Founded in 2003, Cocadisco has become a bit of an institution, bringing some of the world’s best italo DJs to London and providing a platform for the likes of Aphex Twin, Richard X, Russell Haswell and Erol Alkan to spin the “fruitier, stranger” records from their collections. Tonight, Friday 24 July, Cocadisco commandeers Corsica Studios for an all-night party headlined by Vitalic, and also featuring DJ sets from The Horrors and Mark Moore. More information on that party, not to mention the larger story behind Cocadisco, in the Q&A below.

No tracklist for this one folks – see our interview with Piers below for the reasons why – but the keen-eared will likely spot synth-driven contributions from Klaus Schulze, Vitalic and Mr Fingers. Enjoy…

Who or what is Cocadisco? When and where did it come into being, and why?

“Well, as some of your readers will know, Cocadisco is the name of the 2001 album by the Parallax Corporation, the Dutch disco group ‘starring’ I-F and I-G. I think they used Cocadisco to describe the sleazy white synthetic funk emanating from The Hague at that time, which was also when I started getting heavily into this kind of music, into electronic disco. Blame electroclash. By 2002/2003 I was hooked on the exotic sounds of Italo-disco (I still am, deeply), not to mention all the music that fed into it in the early-80s and then flowed out of it, shaping house, techno and pop. But I wanted to hear more and so I asked the chaps behind the Social on Little Portland Street if I could do a monthly night there where DJs I knew would have the chance to play the synthier side of their record collections. They approved. I asked I-F if I could use Cocadisco for the name. He said, ‘Sure, as long as I can come and play there.’ He came over to play a packed Social in August 2005, that was a top night.

“The first party we did there in March 2003 featured Brooks and Richard X. Then TLR from Crème Organization did the next one, then Erol Alkan, DMX Krew, Frank Tope, who all seemed to relish the chance to play their fruitier, spacier tracks. ‘Discovering’ DJ Benetti [AKA William Bennett, Whitehouse co-founder turned hi-nrg DJ par excellence] and offering him his first show in July 2003 was obviously a huge moment for Cocadisco, somehow bettered three months later by the appearance of Richard James, who played two hours of Italo and disco under his Bradley Strider alias – yes, Aphex really did spin Q and Mr Flagio and Koto. Russell Haswell’s September 11 set definitely had its moments. And the last one at the Social in January 2005 with Jackson and Chris Cunningham was special.

“For some reason, with my pal Rodiadh McDonald, we restarted the night in late-2007 in Hackney, in the Dolphin, and that went well, which lead to a stint at Visions Video Bar in Dalston. But then several other new disco nights descended on Visions, so we moved on to doing less regular, more interesting parties here and there.”

How – if at all – has Cocadiso changed since the time of its inception? Do you think there’s a greater or less appetite for italo/disco/synthesizer music now than when you started out?

“I think the idea behind Cocadisco has remained the same: for it to be a place to hear and dance to incredible electronic disco, or synth stuff, or house, or whatever. We’ve had to get slightly more professional but that comes with experience, I’m told. There does seem to be much more of an appetite for every kind of music at the moment, particularly Italo and obscure foreign electronic disco. People are far more savvy and discerning these days and so you have to offer an event of real quality. That’s our slogan: ‘Enjoy quality time with Cocadisco’. I think there’s greater awareness now of a lot of underground, niche stuff – you can brush up on a scene on the internet in an hour and become an instant expert. When Cocadisco started the big hit was always ‘Take a Chance’ by Mr Flagio; now everyone knows that track, it’s a cliché, even my mum knows the words.”

You prefer not to provide tracklists for your mixes. Can you explain why this is?

“Well, this is the first mix Rodaidh and I have done together, and certainly the first properly-mixed mix I’ve had a hand in. We decided not to provide a tracklist because we’d like the listener to be hopefully surprised by what they hear, and also because tracklists tend to remove any mystery. I find that if you come across a mix and see the songs listed in the order you’re about to hear them, then the magic disappears. Then again, there are so many mixes online, many of which are very good, that scanning the tracklist beforehand almost saves you listening to them – you can see that the selector or DJ has excellent taste and knows what they’re doing, and somehow that’s enough – job done. I think the fact that most tracks, however obscure, are freely available for anybody to download means surprises are pretty thin on the ground these days. And so when you are genuinely surprised by a track, that’s a very cool feeling.

“On this Cocadisco mix you can expect to hear Italo, disco, electronics, and one or two new songs. It’s all pretty tuneful. A rollercoaster of emotions that ends with a sheep.”

Tell us about your party this Friday.

“This is our second one in Corsica Studios and we’re thrilled to have Vitalic over to play a special ‘selector set’, which is him on his laptop and effects. His music has had a huge effect on me and most people I know and his new album is tremendous – he calls it “hairy disco” and it’s very rough’n’ready but still tender and romantic. He should be playing a selection from it at Cocadisco. Also appearing are S’Express legend Mark Moore, the Horrors, who are excellent DJs into their synths and house music, as well as newcomers Alonzo Typer and Louis Enchante. It’ll be amazing and you’ll be able to get tickets on the door. Or get them from crowdsurge.com.”

Any plans to start a label or expand Cocadisco in any way?

“Maybe. Some great Cocadisco tote bags and badges have been made in the past. Sometimes a label sounds like a good idea, but I think the reality is less fun. That said, Rodaidh has just started his own label, Touching Music, the first release of which is ‘Momma’ by Publicist featuring Ian Svenonius.”