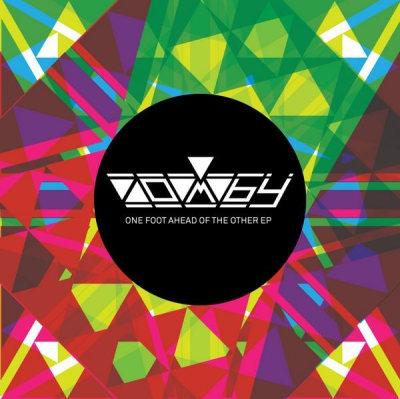 Zomby has a new EP, called One Foot Ahead of the Other, coming out on Ramp, on August 24.

This much you probably knew. Well now we can reveal more. One Foot will be released as both a digipak CD and 12", designed and layed out by Kate Moross (the black circle on the artwork you see above is a sticker on the plastic wrap, and doesn’t appear on the actual digipak). It features nine tracks:

As far as the tracks you can’t sample above go, ‘Polka Dot’ was on Zomby’s myspace almost a year ago, and ‘Firefly Finale’ will be familiar to fans of Dusk and Blackdown’s Rinse show; they’ve played it before in its chrysalis stage under the name ‘Be Reasonable, Expect the Impossible’. ‘Expert Tuition’ is the most 2steppy thing here, with a real touch of Martyn to it, and ‘Mescaline Cola’ is stuttering, paranoid house in a similar vein to ‘Bubble Bobble’, built around a distinctive sample of what sounds like a slurp through a straw and dangerously good.

In fact, this whole EP is superb. It was clear from tracks like ‘Bubble Bobble’ and ‘Godzilla’ that One Foot Ahead of the Other was going to be different to the Zomby records that preceded it – focused on vibrant, sharp, 8-bit sounds that seem to stare in every direction at once (as opposed to the amorphous gloop of his self-titled Hyperdub EP or the Atari and Akai sampler-indebted hardcore of Where Were U In 92? on Werk Discs), and it lives up to the promise of these tracks and expands this vibe into a cohesive mini-album that’s as colourful and multi-layered as the sleeve artwork. Watch out for a full review nearer the time of release.