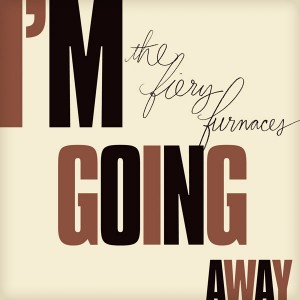 For me, the siblings Friedberger have possibly been the most impressive musical partnership of the decade – certainly in the field of guitar music there are very few who touch them. Widow City, EP, Bitter Tea and especially Blueberry Boat are stunning in the way they combine complex, anti-pop song structures with instantaneous moments of heartbreak and nostalgia. Even on the duo’s less, er, good albums (Rehearsing My Choir, Remember), they fall down on the basis of sheer ambition: the former is a concept album narrated by their grandmother, and the latter a 132-minute, three-disc live album that, to be fair, is designed as a collection of material rather than an LP to listen to in full.

I’m Going Away is the Furnaces’ most straight-forward album since their debut: the taut synths and 8-bit sounds that punctuated Blueberry Boat are completely gone at this point, leaving something closer resembling the White Stripes if they traded their red and white for pastel. Which doesn’t have to be a bad thing. Opener ‘I’m Going Away’ is a bit too Battles for comfort, but ‘Drive to Dallas’, ‘Charmaine Champagne’ and single ‘The End is Near’ are jangly bar-room ballads that excel through simplicity – in fact, the worst bit of ‘Dallas’ is when it speeds up and wiles out at the end.

Where as the middle-8s on past Furnaces albums seemed designed to accommodate the duo’s weirder side, filled with pitch-bent notes slowed to half-speeds, here they accompany traditional drum breakdowns. ‘Ray Bouvier’ even sports a shameless guitar solo, and vocals aside, ‘Even in the Rain’ could be Blur if you squinted. It takes a while to get used to, but ultimately we’re talking about a pair of songwriters who’re good enough to pull off these sorts of blues-rock standards – and while it’s easy to miss the eccentricity of their past LPs, how many other bands could trade in half the stuff that defined them and still pull out songs as memorable as ‘Keep Me In The Dark’?