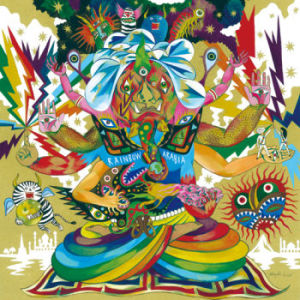 There’s a great quote about Rainbow Arabia’s ‘Haunted Hall’, from a past issue of the FADER, that simply reads: ‘Someone really liked Gang Gang Dance’s last album. Oh, us. Which is why we really like this Rainbow Arabia track.’

More new bands that sound like Brooklyn’s foremost hippie trio is hardly a bad thing (fuck, it beats The Strokes), and the first few notes of Kabukimono, Rainbow Arabia’s new mini-album for Manimal Vinyl, are so Gang Gang it’s comedic: the drums and scratchy guitars giving way to a full-on exposure of aquamarine notes that’s something like the aural equivilant of breaking through undergrowth and seeing a waterfall, before vocals come in that sound like they could be by Lizzi Bougatsos’ little sister.

Of course, there’s more to Kabukimono than GGD tribute (for the record, the band say they never set out to sound like Gang Gang, but they can see why people say they do). ‘Holiday in Congo’ cuts through the pop tribalism with old school hip-hop breaks, and ‘Haunted Hall’ is on a hushed inner-city dancehall tip. ‘Kabukimono’ trades the improv-style percussion of ‘Congo’ for a metronomic drive, circled by wonky eastern synths that make it sound like music from Skyblazer, while ‘Harlem Sunrise’ is the sweetest thing here: all playful steel and summer nostalgia (‘taking the old train home/back to my golden Harlem’). Remixes come courtesy of Ghosts on Tape and Brenmar, but they’re pleasant afterthoughts: the original material on show here makes for one of the year’s most enjoyable EPs, and frankly I can’t wait for the album that follows.