Clutch: Strange Cousins from the West 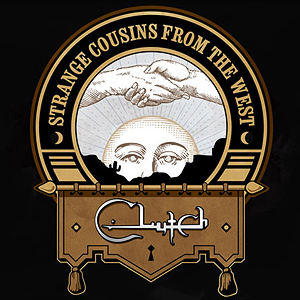 It’s pretty impossible to dislike Clutch, unless you dislike rock itself. Firm cult favourites from their debut (‘A Shogun Named Marcus’ is an underground anthem) and even before (legendary label Earache released the Impetus EP), they brought the mid-90s stoner/space rock as magnificently as Kyuss and Monster Magnet.

After nearly losing it at the end of the 90s, with the unfocused Jam Room, 2001’s self-explanatory Pure Rock Fury saw them fired up once more. Strange Cousins From the West is their fourth since then; the latest in a run of consistent quality. And, while the quintet (since 2004) have consistently evolved – at least within their blues-hardcore template – this latest one sounds oddly familiar. Yes, those snaking, catchy-yet-complex riffs, recent-historical urban mythologising and vintage sound point to one thing: career-high The Elephant Riders (1998).

The band spoil us from the outset with, as Westwood might say, hit after heavy hit. ‘Motherless Child’ rolls in on one of the heaviest bouncing riffs since Entombed redefined ‘death’n’roll’ over a decade ago, and if ‘Struck Down’s riff isn’t lodged in your head from the off then your short-term memory’s beyond repair. The album’s highlight though, is the frankly bizarre ‘Abraham Lincoln’. where Neil Fallon and co. bring a tardy tribute to the former US leader, and tell his assassin: ‘no grave for you’. Even odder is the fact that this is ostensibly a call-back to Clutch’s ’95 song ‘I Have The Body of John Wilkes Booth’. Talk about setting a president. Sorry.

The musicologist in me is ever-uncomfortable about white men bringing the blues-rock, and looking backward for inspiration. But at least with Clutch their past glories are worth revisiting. It’s frustrating that the band insist on such a clean guitar sound, but they’re still heavier and more energising than Wolfmother, Kasabian, the Enemy, or whatever else passes for big rock these days. If you like riffs and weirdness, get this listened.