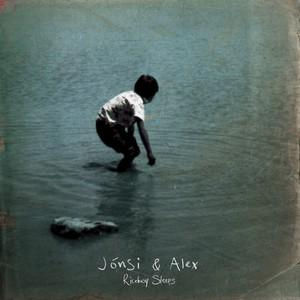 Riceboy Sleeps: a bit of background, followed by a bit of truth.

The background: Jónsi and Alex is a collaboration between Sigur Ros vocalist Jónsi Birgisson and Alex Somers, Jónsi’s boyfriend who’s done a lot of Sigur Ros’s artwork in the past. Sigur Ros were, it’s widely acknowledged, good for three albums, then had a real turning point with Takk, which has that song ‘Hoppípolla’ that’s used non-stop in the credits of wildlife documentaries and Sky Sports montages. Since then they’ve effectively been Coldplay singing in a different language [Does that make Alex their Gweneth Paltrow? – Ed]. Riceboy Sleeps though, is an ambient record that discerning publications like Nuts and the London Lite will tell you is – wait for it – a lot more far out and ‘weird’ than Sigur Ros, so approach with caution. This might fool you into thinking it’s good.

The truth: it’s not. The reason that Sigur Ros, despite their wibbly nature, pretentious interviews, made-up language and the rest of it, used to be good, was the intrigue to their music. Second album Ágætis Byrjun dripped with mystery, from its artwork to the music contained within, and that maybe applies even more to the band’s hard-to-love untitled third LP. The music was vibrant in its own right, but really what kept pulling you back was the presence of the songs: where were they made, how were they made, what are they about? The usual.

But that’s all gone now. Riceboy Sleeps is ambient by numbers: a bit of rain here, a bit of shimmer there. Songs called things like ‘Indian Summer’ and ‘Sleeping Giant’. The odd bit of strings that you see coming a mile off. None of the imagination of a Gareth Hardwick, none of the focused experimentation of a Lullatone, none of the beauty of an Eno, and certainly none of the intrigue you’d find in a million better ambient records that aren’t called things like Riceboy Sleeps and are made by musicians who’re actually interesting. If I ever go to Hawaii with my boyfriend and come back with a story this dull, then remind me not to put it on a CD.