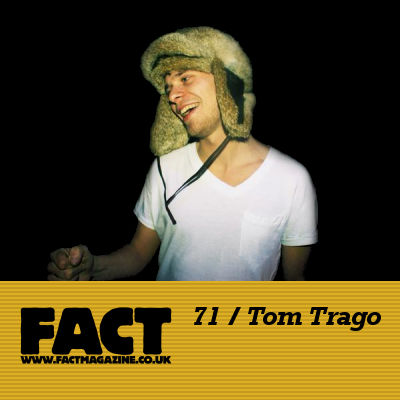 Our 71st exclusive FACT mix is by a young producer from Amsterdam named Tom Trago.

Many of you will already be well aware of Trago. He’s been releasing records on Rush Hour Recordings, one of Europe’s finest labels, since 2006, making everything from well-groomed Detroit techno (‘Primary Roots’, a collaboration with Yuro) to tripped-out Rustie-style hip-hop (The Fluor Green EP). Earlier this year he released his debut album, the terrifically accomplished and very disco-flavoured Voyage Direct, which has just spawned an incredible remix 12″ featuring contributions from Actress and Motor City Drum Ensemble.

Grab Tom’s mix below – tracklist coming soon – and read the interview that follows, in which he talks us through his influences and some of the other projects he’s currently working on, including collaborations Dorian Concept and the Kindred Spirits Ensemble.

You’re fresh from some live performances with the Kindred Spirits Ensemble, right? How did you find that?

“Amazing, I was astonished by the way everybody worked together, right now now I’m finding doing things with other skilled musicians very inspiring…”

Tell us about your history in music – what you grew up listening to, what inspired you to become a DJ and producer, where you feel you’re at right now.

“When I was young my parents used to take me out to see a lot of concerts. Also they were big fans of ‘world music’ – that stuff was constantly coming out of our speakers at home. I started playing piano at the age of 4. By the time I was 14 I was tired of practising and rehearsals and the whole hip-hop culture got my attention – especially DJing. I started practising turntablism and got into playing records at school parties.

“Around the age of 18 I moved to Amsterdam and there the DJing really took off. I started making money with playing records and I started getting professional. I was hanging out a lot with Kid Sublime in that time and he really showed me how to work the MPC. The MPC 2000 really got me into producing or maybe I can better say: making beats. Making beats took over my life from 21 and on. Now I just turned 26 and I’m still making beats every day.”

“I just turned 26, and I’m still making beats every day.”

How did Voyage Direct come together? Was it conceived as an album, or is it just a collection of tracks you’d been working on?

“It was never meant as an album, it is more a collection of tracks I did over 2008. Together with Christiaan [Rush Hour label manager], we chose a selection of tracks that have the same kind of vibe. I am quite happy with it: it is, in a way, my interpretation of house, disco and techno all together.”

You play live keys on the album right?

“Yes, I think every track on the album has live instruments. But the keys on ‘Lost In The Streets of NYC’ were recorded in one take. I started playing some stuff on my mother’s old piano and my friends Wix and Peven walked into the studio. They were so enthusiastic that they forced me to record them. The rest is history.”

Are there any particular young or up-and-coming producers who you’re into at the moment?

Your sound is a great fit with the Rush Hour sound/aesthetic. How did you first hook up with the label?

“It was a real natural development. I got to know Christiaan and Antal through the nightlife of Amsterdam, as I was playing a lot in clubs. I was heavily influenced by them as DJs. At that time (around 2003) I got to know Kid Sublime and we would hang out for long nights in his studio. He showed me how to work on a MPC and SP1200. As he was already releasing records on Rush Hour (as Rednose Distrikt), it was quite logical for me to drop my demo-tape at their office. I am very proud that it is an Amsterdam-based label. It couldn’t be better because I love to promote Amsterdam and the cool scene of people here. And that’s also what Rush Hour does. I also love the other stuff they’ve released. It’s an honour to stand among the other artists.”

How do you feel living in Amsterdam impacts on your music? Do you think there’s an “Amsterdam sound”?

“I am naturally influenced by the people around me. And also their opinion about my music, so in that way my environment influences me a lot. Amsterdam is in my blood. I am born here and I will always feel at home. I was influenced by Rednose District back in the days and I hope to inspire producers from Amsterdam in the coming years. I think there is an Amsterdam sound, yes, but it is not “one sound”. And I guess that’s kind of Amsterdam style: a big mixture of a lot of things…”

“I like the whole beat thing going on now. I like Joker, Mark Pritchard,all the L.A. cats and especially Rustie. Really my shit.”

Tell us about the Parra Soundsystem…

“The PSS is a crazy collective of Amsterdam-based artists. It consists of five members: Parra, Gee (patta), Mo (Mo Manager), Wix (Enplus) and me. It’s a lot of fun when we’re together and we all inspire each other by doing different stuff. We did a lot of nights all over the world and we will keep on doing this. I see PSS as a platform for our crazy ideas. We release music and re-edits and we have a resident night in Paris and in Bern. We love to play all kinds of music and we like to rock ‘n roll…”

Your Fluor Green EP was on more of a hip-hop tip; can we expect more of this kind of stuff from you in the future? Are you a fan of people like Rustie, Joker…?

“I am already thinking of an album that’s sounds more like the Fluor Green EP. It was just that I really wanted to do this Voyage Direct album. I still listen to a lot of the “beat/instrumental stuff” and get really inspired by it. I don’t want to make just one style of music and will always switch genres. I like to find my way trough music by making it. I like the whole beat thing going on now. I like Joker, Mark Pritchard. all the L.A. cats and especially Rustie. Really my shit.

Your very open approach to music-making reminds us of [Amsterdam producer] Aardvarck. Is he an influence?

“Of course, I love his style and charisma. He is a real living legend. Also I am a big fan of his music. But I think Steven and Kid Sublime influenced me more directly, when it comes to making music in the studio. They really showed me the way you can work with samples and stuff.”

You’ve worked with Yuro on some great productions. How did you guys first hook-up, and will the partnership continue into the future?

“We met through the Rush Hour store and we kind of immediately felt a good vibe. We started playing together as DJs a lot. And then we became roommates. We really listened to a lot of music together and we would always make crazy little beats with the MPC in the afternoon and at night. So I moved out at a certain point and Yuri came by my new apartment, it was this sunny summer day. He came in to the room and we decided to make some different stuff that day. ‘Primary Roots’ was born. We are now both really busy with our own stuff but I guess we will always ‘just have fun in the studio’.”

Have you got any releases or projects planned for the future that you can tell
u
s about?

“The two Voyage Direct remix 12” will hit the stores about now. I did a complete disco/New Wave album (on which we played all the instruments ourselves) with San Proper. And this year I will try to release the album Voyage Direct 2. I just finished a project for Kindred Spirits calles ‘Strings of Life’ which will be released on DVD, and I’ve done about five remixes which will all see the light of day after summer. Oh, and I’m hosting the new monthly RUSHHOUR RADIO show. Lots of DJ sets and live shows around the world too.”