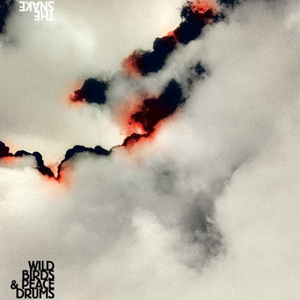 If, like me, you are an uptight Englishman, the sincerity of the new generation of folky, organic, beard-wearing music throws up all sorts of problems.  There are so many archly theatrical CocoRosies and Devendra Banharts around that it’s hard to hear a band as overtly spiritual and groovy as Swedish duo Wildbirds & Peacedrums without looking for irony, or seeing their drum-circles-and-groaning as kooky schtick of some sort. But if you persevere, listen to them for a bit, and decide they really mean it, then the question arises of whether you can take it seriously.

It’s Mariam Wallentin’s singing that trips you up: the combination of mythic lyrics in painstakingly perfect Scandiwegian English pronunciation with heartfelt Janis Joplin gutsiness, and sobbing and wailing that edges towards Diamanda Galas territory, causes such cognitive dissonance that it’s hard not to laugh. It’s like having some Nordic drama teacher or spiritual workshop coach telling you "and now we loosen up and become spiritually free, OK guys?".

There is a solution, though. In the live arena, WB&PD are rightly celebrated – Andreas Werlin’s thundering drums hit on a primal level, and in person, Wallentin’s abandon is obvious and infectious – so this album is best appreciated in an approximation to a concert: that is, slightly drunk and very loud. Even with a large whisky, you might emit a snort of laughter at Wallentin singing about swimming Vikings and ending with an over-pronounced "ding dong a ding a ling a ling" in album opener ‘Island’, but once the defiant kick and chant of ‘There Is No Light’ starts up, you’d have to be a right smirking numpty not to find yourself nodding along just a little bit.

Once they’ve got you, they’ve got you.  Werlin’s drumming hits the same spot as late-period Boredoms, and despite all the avant-gardism, the melodies in Wallentin’s vocals and her glockenspiels and other chimes are as insidiously hooky as just about anything in chart pop. Pour another whisky, and if by the time the swelling chorus of "I’m lost without your rhythm" in final track ‘My Heart’ comes along you’re not at least tempted to sing along then frankly you’re dead inside. You might feel a bit embarrassed by it all when you sober up, but trust me, it’s worth it.