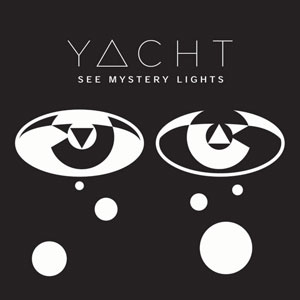 Sauntering out of the mist in a jumble of maracas, ukuleles and happy-go-lucky vocals, ‘Ring the Bell’ – the opening track of YACHT’s fourth studio album, their first for DFA Records – wields the threat of Big Weekend boredom like an enormous pink balloon of weapons-grade laughing gas. Happily, the threat is short-lived, making way for a thunderous four-four kick drum that ploughs wildly edited vocal chops and shuffly percussion into a glorious pile-up of sound that, as it happens, characterises the entire record.

From here on in things just get better: ‘The Afterlife’ (and I wish I wasn’t writing this) boasts a chorus that for all the world sounds like Desmond Dekker & The Aces’ hit ‘Israelites,’ stomping around the room as vocalist Claire Evans hurls atonal Mu-esque vocals over Jona Bechtolt’s jerky drum programming. ‘I’m In Love With A Ripper’, with its surging arpeggiated bassline and ice-cold keys begins to hint at an underlying dancefloor sensibility, but the real star is ‘Psychic City’. Almost certainly destined for Nick Grimshaw’s hideous little iPod; it’s a picnic of melodies, plinky-plonky IDM and meaningless lyrics, but all this really means is that I can’t get enough of it.

Elsewhere, ‘Summer Song’ explores what Nightclubbing era Grace Jones might sound like with a bit of 21st century urgency, and ‘We Have All We Ever Wanted’, heavily informed by Kraftwerk, is a playful work-out of drum machines and muted funk guitar. Truth be told, there are endless lazy comparisons to be made here – the point is that with this much good stuff at work and Jona Bechtolt’s competent production to join the dots between it all, See Mystery Lights is as good an expression of 2009’s muddled musical landscape as anything else out there.