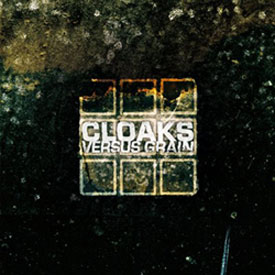 A lot has been said about the “dubstep virus”, but viruses don’t crossbreed with their hosts. Dubstep, however, does, and its genetic characteristics appear to be dominant: it doesn’t infect other musics, it hybridises with them, and its characteristics enter their populations and, in many cases, revitalise them with hybrid vigour. Being an unashamedly mongrel genre to begin with, its abilities to breed with 2-step, D&B, grime and dub-techno are unsurprising, but it has proved just as fecund when it comes into contact with everything from mainstream hip-hop and R&B to electro-pop, broken beat and electronica – and indie-step and emo-step can’t be far off.  Dubstep is, essentially, a slag.

In the case of grim-lord Norfolk duo Cloaks, it’s out-and-out noise that dubstep has spawned offspring with, and the results are bracing to say the least. A few people have injected dubstep with the aggression of industrial, metal or techstep, most notably early Vex’d and The Bug, but nobody until now has combined full-tilt destruction derby Merzbow-ism and latterday soundsystem dynamics with this degree of focus and screw-faced determination. This music is the diametric opposite end of the wired-on-skunk spectrum from the whirling fairground kinetics, supersaturated colours and videogame hyperactivity of Rustie, Joker and Zomby: it’s the sound of oppression, depression, paranoia and relentless plod, of burnt-out synapses and crackling, inhuman signals being pointlessly transmitted across barren, lifeless landscapes. And it’s brilliant.

A good deal of post-rave has taken in the cybernetic audiovisual influences of Robocop, Terminator and Alien, but this is far closer to the metal-fucking body-horror of something like Tetsuo The Iron Man. As the track ‘Rust On Metal’ suggests, there is not a single clean line or surface anywhere in Cloaks’ soundscapes: every single sound is degraded or overdriven until it splits and frays round the edges, and the concept of “bass pressure” in this case evokes images of car-crushers in action. But somewhere in all of this churning sonic grotesquery, like Tetsuo trapped in his metal body, there is still the spark of something human. Even though the rhythms clank and grind against one another in superficially unwieldy fashion, at heart they are still dance rhythms, with the echoes of human bodies that that entails, and though the sounds speak of suffering and disgust, there is still an unmistakeable sense of elegance to their arrangements, as if Cloaks are almost forced to create something balanced and beautiful despite themselves. Just as live instruments will erupt up through the noise of a Wolf Eyes track, so the dubstep rhythms and bass drops of Cloaks’s tracks arrest the horror of their distortion-fests and remind that despite it all, this is music, and perversely thrilling music at that.