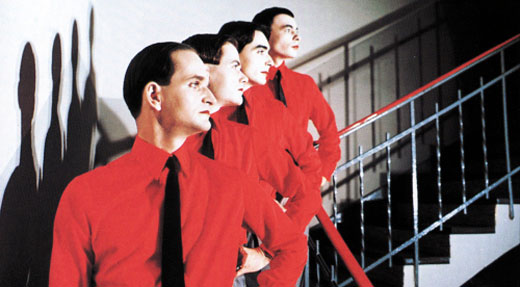 On October 5 Kraftwerk will release 12345678: The Catalogue, a CD box set collecting eight of their classic studio albums. Newly remastered versions of the albums will also be available individually on CD, vinyl and download.

The release is via Mute; it marks the 35th anniversary of the band’s 1974 hit ‘Autobahn’ and will come mere weeks after they headline the 2009 edition of Bestival. Kraftwerk are arguably more important than The Beatles in terms of profound influence on the evolution of modern music, from chart pop to hip-hop, techno to ambient. Without this troupe of unassuming Dusseldorf gentleman there would be no Aphex Twin, no Carl Craig, no Daft Punk, no Timbaland. The world would be a sorry place indeed.

This year Kraftwerk have upgraded their Kling Klang masters with the latest studio technology, at once preserving and enhancing their original sound. The following will be available as part of the 12345678 programme:

–  8 x individual CDs presented in special slipcases featuring newly expanded artwork, including many previously unseen images all of which have been reproduced to the highest technical standards.