Mark Seven: Salute To The Men of Vauxhall 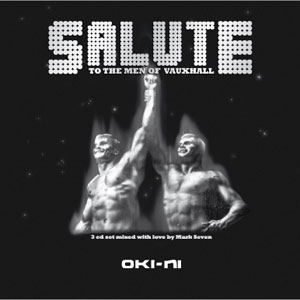 Not many people are worthy of salutes these days – well, maybe with the exception of the Queen and a certain Mr. Magpie – but Jus’wax head honcho and crate-digger extraordinaire, Mark Seven, gives an almighty and deserved one to the lovely Horse Meat Disco crew from Vauxhall, by releasing a limited 3 CD mix recorded at the much-loved South London club back in May. Seven is renowned for his impeccable mixes and compilations – from A Slow Blow to Originals Vol.2 – and the mere mention of his name causes trainspotters to salivate wildly, talk in tongues and send Discogs working crazy overtime.

This is an emotive mix: there’s the utter elation with the first stirring of disco strings; the sheer joy of lost ’80s classics by Hall & Oates and The Pointer Sisters; the ‘wow, what the hell was that?’ moment when some obscure italo song pops up; by the time the Moroder-produced Donna Summer classic ‘Now I Need You’ arrives, you’ll probably have lost your mind. And that’s just Disc One. With no tracklisting, the fun is in its spontaneity and surprise. I hope I haven’t given too much away already…

Carefully poised, from the song selection to the flawless mixing, A Salute just oozes class and, more importantly, intimacy. It has an unshakable warmth and tenderness and it’s hard to imagine it being recorded anywhere other than Horsemeat Disco. With such a unique dancefloor and clientele, the place seems to sprinkle magic (or poppers) on every record that is played there.

It’s a shame they’re only running A Salute on limited release (100 copies), as it should be heard by as many people as possible. Whether you like disco or not, Mark Seven has produced an awe-inspiring mix, which will, in a few years time, be talked about in hushed and reverent tones. A salute? A bow, a curtsy and a forward roll would be more apt.