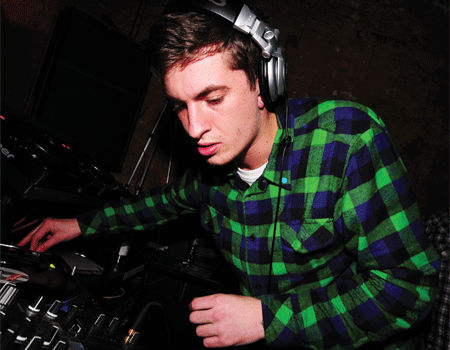 Skream has been twittering on about being asked to remix Natasha ‘Bat for Lashes‘ Khan for a while, and now you can (sort of) hear the results.

The Croydon dubstep original has leaked an mp3 file titled ‘2step’ that contains a brief mix of new material in demo form, the last track of which is his take on Khan’s ‘Pearl’s Dream’. On a ethereal garage tip, it’ll appeal far more to fans of ‘If You Know’ than ‘Oskillatah’, and that’s fine by us. You can download the mix here.

In more Skream news, he’s been collaborating with fellow dubsteppers Joker and Zomby lately. Both Skream and Joker’s myspaces have referenced a ‘Joker vs Skream’ project in the past, and so long as word on the street (or, er, word on Dubstep Forum) is correct, it’s been under the name Parma Violet (the name of a purple brand of sweet made by Swizzles, if you didn’t already know). You can download Skream’s recent mix for Mista Jam’s Radio 1xtra show here, featuring a track by the duo titled ‘Skittles’.

Zomby Vs Skream…coming soon…4:33 AM Aug 5th from web

if your in Ibiza go see Skream DJ hes got the dubplate.4:56 AM Aug 5th from web

But then again, if you were in Ibiza you’d probably be on the beach rather than reading FACT.