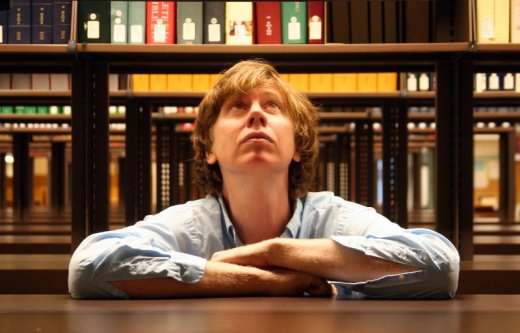 Jim O’Rourke, whose forthcoming LP for Drag City, The Visitor, is shaping up to be a real office fave here at FACT, will release another album this year on Ecstatic Peace, a continuation of his White Out project with sometime Sonic Youth bandmate Thurston Moore [above].

Titled Senso, the pair will release it on October 12. We haven’t heard it yet, but it’s a double CD, and a live recording from Tonic Club. It’ll probably be well skronky, a bit scratchy, and the opposite of the uber-pleasant Visitor. That’s where our money would be if we were betting sorts anyway.

It’s not the only forthcoming release on the label that tickles our fancy though. On October 19 Hush Arbors will follow last year’s superb self-titled LP with Yankee Reality. Then on October 26, Wire-loved folk duo MV+EE will release Barn Nova, a "feature film for the blind" that marks the prolific husband and wife’s return to the label.

But maybe most exciting is this: on November 2, Sunburned Hand of the Man will release their second collaboration with Four Tet/Kieran Hebden. Titled A, it finds the band "directed by Kieran like actors in a film", where they’ll apparently be "taken off the bandana smokestage of their previous collaboration – Fire Escape – and put onto a sweat-soaked 4am lysergic dance floor. Kieran uses the band like his live instrument laptop and sampler." Oh, and the artwork is by West Coast legend Raymond Pettibon. Cool.