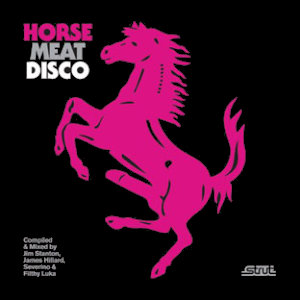 Jim Stanton, James Hillard, Filthy Luka and Severino are the foursome behind Horse Meat Disco, the DJing crew who’ve largely contributed to disco’s new found en vogue status in London. They’ve made Sunday nights at the Eagle in Vauxhall, South London the only place for the fag end of the weekend to be chomped down hard on and swallowed whole: a party in thrall of the raw dancefloor sweat of legendary NYC clubs like the Gallery of Loft, with no room for ego or disassociation.

Their residency and numerous club appearances across the UK and the globe have provided a playground for heteros, lesbos and don’t knows to collide. Bears, drag queens and more discerning club kids are all welcome to shake their toosh and share amyl to the HMD soundtrack of underground music, which has one eye on the past and two dancing hooves firmly stuck in the bottom end of the future. Even though their vibe has attracted appearances from James Murphy, Luke Unabomber and Danielle Baldini, it’s the ressies, as they more than ably demonstrate here, that are right at the heat of the party.

HMD’s first compilation emerges on bastion of all tings disco, Strut. Although there’s a whiff of crate digging gone into the selections (which ain’t necessarily a bad thing), this mix is aimed straight at the floor. It’s the perfect soundtrack to a house party where there’s a gaggle of trannies, too much fine cheese, a barrage of italo and it all culminates with the roof caving in due to the volume of strong looks and horn on display [Cheesy horn on display? Sounds like every house party I went to back at school – Ed]. Gino Soccio’s ‘It’s Alright’, TJM’s ‘Put Yourself in my Place’ and Karen Young’s ‘Deetour’ are three highlights, but the whole mix is great – moving both your groin and your brain with euphoric disco bangers, hi-NRG funk and leftfield floor-fillers.

It’s hectic, and even kicks off with an answer phone message from Craig, a disheveled reveller who’s trying to find his way home from a night of horseplay in Vauxhall:

"This massive glass unicorn came crashing through the middle of the dance floor and the unicorn started chanting me name…When I got in the ghost of Ron Harvey was on the decks…I’m just on me way home – just let us know your thoughts. Andy, see you later…"

If you ever needed an excuse to plan a sickie, don your favourite tail feather and get yourself down to Vauxhall of a Sunday eve, then this is it.