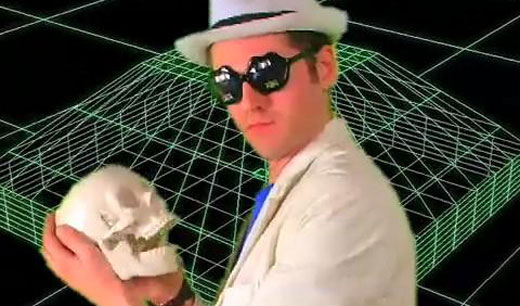 Oh, Excepter. How we’d love you to "do a Saint Dymphna" and turn years of enchanting but largely unlistenable freeform jamming into something coherent and just a little bit – dare we say it – poppy. Your new album, Black Beach, just isn’t that type of record. But, on the plus side, it does come with an accompanying DVD of you pratting about on a beach doing vaguely psychedelic stuff. It’ll do.

The album is actually billed as the soundtrack to the film; both are entitled Black Beach (apparently it can be found next to Fennesz’s Black Sea). The film was shot by Harrison Owen, and captures open-air performances by the New York band at Big Sur, the Californian beach historically beloved of surfers, beat poets and the like. Extra features include footage of a full show by Excepter at The Echo in L.A., a couple of bonus loops (‘Pismo Pool’ and ‘Waves’) and "other surprises". The music was recorded on location, with electronic processing and production added later. In their own, more florid words:

"Here, at the literal End of the West…Watch as Excepter descends the great stair down to Sand Dollar beach, armed only with a flute and a small bag of percussion. Listen as Excepter walks on Morro Bay to the dread beat of the setting Sun. See Excepter dressed head-to-toe in black in the noon-day heat on a nudist beach (Parental Guidance Suggested). Feel the hostile surf continuously lash the last soundclash."

Beaches and surfing seem to be a recurring tropes in the 2009 art-rock/electronic firmament – see also Ducktails’ self-titled album for starters – but no one is better qualified to make a bonkers video about sea ‘n sand than Excepter. The band, who are signed to Animal Collective’s Paw Tracks label, have always made agreeably weird videos (see screengrab above), and Harrison Owen has been behind the lens for two of ’em, ‘If I Were You’ and ‘Kill People’.

Black Beach will be released October 19 on 12" vinyl only (with DVD included) in a limited edition of 500, with a free coupon for digital downloads.