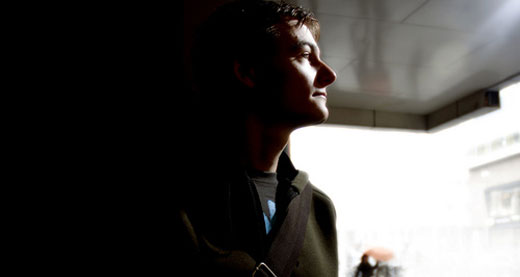 Unbalance is the new album from 2562, scheduled for release by Tectonic Recordings on November 2nd.

It’s the long-awaited follow-up to his landmark debut, Aerial, which came out on in early summer 2008 and has proved to be one of the most influential and vividly-realized dubstep albums yet made, stretching and squashing the sound into totally new shapes and forms. At the time, much was said of Aerial ploughing a furrow between dubstep and techno, but in retrospect that seems a gross simplification; 2562 had in fact created a style all his own, and this is borne out by the fact that no one has yet been able to successfully imitate it.

Over the past year or so Huismans has continued to produce a number of 2562 singles and remixes, but arguably he’s placed more emphasis on his other project, A Made Up Sound, which finds him exploring more of a Detroit-influenced, broken house and techno sound. There’s definitely a whiff of AMUS to the new 2562 album. And boy, what an album it is.

Aerial was plenty daring and distinctive, but on Unbalance Huismans really takes his sound to the next level; the drum programming is simply off the chain, the ultra-tight editing and control of depth and dynamics quite genuinely awe-inspiring.

Tectonic boss Pinch says: "I’ve worked closely with 2562 over the last few years and I can honestly say that Unbalance is an incredible album – it’s one of the most exciting releases that Tectonic has seen to date – it vastly exceeds the already high standard he set himself with Aerial."

Trust Pinch, readers, and trust us; Unbalance is big.