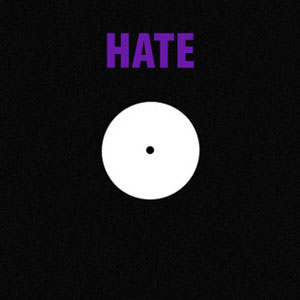 I’ve been following the HATE series since its mysterious inception last year. Brought to you by Manchester’s Modern Love / Boomkat crew, each HATE 12″ purports to carry a new production alongside an archival find from the ’93-95 period when hardcore was morphing imperceptibly into darkside jungle.

It’s anyone’s guess who the new productions are by – though it’s a fair bet that Modern Love mainmen Andy Stott and Miles ‘MLZ’ Whittaker have played their part. Anyway, all this is beside the point: HATE deliberately attempts to replicate the mystery and anonymity of the mid-90s rave underground, and we should really just shut up and enjoy the ride. And what a ride.

A-side ‘Hello Darkness’  is just brilliant, a haunted badboy roller with rainy-day synths that put me in mind of 2 Bad Mice at their most, ahem ‘reflective’; in fact, it’s not hard to draw a line between this stuff and the kind of smudged neo-garage that someone like Martyn’s making in the present day. Though made from ’94-vintage loops, the track was arranged and built in 2009 and it shows in its stealthiness and restraint.

On the flip you get 1994 original ‘Bad Organs’: a terificilly murky breakbeat rave monster, with the kind of hilarious but ultra-effective riffage that British bedroom producers used to nick off Belgian import 12″s a decade ago.