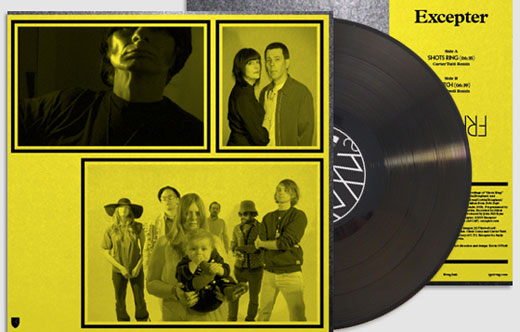 Jesus, how hipster is this? Self-styled industrial pranksters Excepter, whose new "surf movie" we reported on earlier this week, are teaming up with RVNG Intl., the New York disco/edits label home to Tim Sweeney, Lovefingers and Justine D.

The Brooklyn-based band, who are signed to Animal Collective’s Paw Tracks label, will release an EP on FRKWYS, a new sub-label set up by RVNG to bringing together "contemporary artists and their progenitors by way of remix,reinterpretation and original collaboration." Perversely entitled Volume 2, the inaugural FRKWYS features three different remixes of Excepter tracks.

‘Shots Ring’ is re-built by none other than Carter Tutti, AKA Throbbing Gristle‘s Chris Carter and Cosey Fanni Tutti. Excepter’s chaotic but single-minded jam music has always had more in common with techno/house than indie-rock, and this absolutely terrific remix really brings that crackpot dancefloor vibe to the fore. Listen to the track below, accompanied by a typically killer video by Petra Cortright. On the B-side there’s a remix of ‘Stretch’ by the mighty JG Thirlwell (Foetus) and as a digital bonus there’s a mix of ‘Kill People’ by Jack Dangers of Meat Beat Manifesto. A big deal all-round.

FRKWYS is a play on the name of Moses Asch’s legendary Folkways, and each of its handsomely packaged 12" releases will be in limited editions of 900 copies. They’ll also be fan-funded, to a degree. We’ll let RVNG themselves explain:

"It’s been inspirational / exhilarating working with both our peers and artists whom we hold close to heart as heroes. The willingness and enthusiasm on both sides to experiment in this context has created an unbounded feeling to the series. As you’ll hear, the results speak for themselves. This is future future music.

"Perhaps an anomaly in this current music climate, we are compensating all of the artists involved upfront for their valuable time and efforts and doing everything in our means to create suitable environments and tools for these unique collaborations to happen.

"We are housing these limited edition 12"s in a seemingly simple but financially devastating package using classic tip-on style jackets wrapped inblack leatherette and overlayed with Frkwys "family portraits", creating a truly substantial and archival feel. While we’ve never encouraged it, our past limited pressing have often found their way to internet auction sites and through trader networks at costs inflated well beyond the original, affordable sticker price.

"These financial factors considered, our budget is long spent and we’re looking for just enough to complete the jacket & LP production. As part of our backer awards, we are offering a one time initial subscription to the ten part series. Because we are a small crew contending with a ton of mailorder, we are only offering 100 subscriptions to the series, all of them through Kickstarter because we think this site is the shit.

"We anticipate one release every other month starting August 2009 and ending February 2010. We will announce the next collaboration a month prior to the release date. Other artists we’re lining up for FRKWYS include Psychic Ills, Mirror Mirror, and ARP. We’ve gotta keep the collaborations tight-lipped for now or it would spoil the fun."