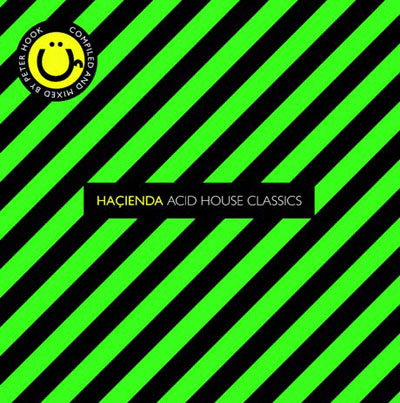 Next month will see the release of Haçienda Acid House Classics, a compilation assembled and mixed by Peter Hook.

The Haçienda was conceived, founded and financed by Factory Records and Hook’s band New Order, and first opened for business in 1982. For the early part of its life it was best-known as a gig venue, once even playing host to Madonna, but by the end of the decade the club became synonymous with the acid house explosion.The US underground scene began to cross over around ’86, and one of the first acid house nights at the Haçienda found Frankie Knuckles, Adonis and DJ Pierre playing to a half-empty dancefloor. By 1988, though, house music and ecstasy had conquered the hearts and minds of Britain’s youth, and Hac residents Mike Pickering, Grame Park and Jon Dasilva were on hand to soundtrack the second summer of love and the long, long autumn which followed it.

The tracks on this compilation have been hand-picked by Hook and they’re all classics: Frankie Knuckles and Jamie Principle’s ‘Baby Wants To Ride’, a previously unreleased edit of A Guy Called Gerald’s ‘Voodoo Ray’ and Charles B & Adonis’s ‘Lack of Love’, and productions from Josh Wink, Kevin Saunderson, Neal Howard, Hardfloor, Ralphi Rosario and many more. Full tracklisting below.Haçienda Acid House Classics (released by New State Recordins) ties in with the publication on October 5 of Hook’s "biography" of the club, Haçienda: How Not To Run A Club.