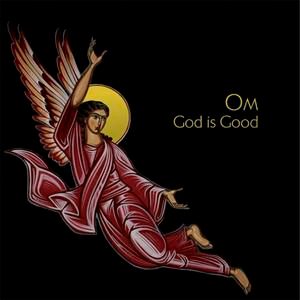 Om, the newly Drag City-signed stoner rock duo that formed from the ashes of doom legends Sleep, made a name for themselves by doing what they do best: heavy riffs, and lots of them. Self-aware if nothing else, their debut was named Variations on a Theme. But post-metal, like any chrono-centric sub-genre, ages rapidly, and what was once cool can soon find itself sounding hackneyed. Just ask Jesu.

Judging by God is Good, the band’s fourth album (it’s also their first featuring new drummer Emil Amos, and their second recorded with Steve Albini) Om are aware of this pitfall. The sludgy, repetitive riffing of the earlier albums has fallen by the wayside, seemingly sloughed off as a butterfly might forget its past as a caterpillar. Which isn’t to say this album’s a bright or beautiful as that description makes it seem – in fact, God is Good is more like a moth, refusing to draw attention to itself; at home in the must and dusk or the dimmest recesses.

And as with your average moth, there is subtle variety and intrigue in current Om’s earth-tone and darkness. The songs are shorter than they were on the duo’s first two records, produced by Billy Anderson (Neurosis, Melvins), and where once there was trepidation at slogging through another twenty minutes of riffs, there’s now a genuine curiosity to Om’s music. ‘Thebes’, the album’s epic, is the weakest song on here, but it really picks up on the other three – at a combined fifteen minutes, the journey they take us on is far more satisfying, and they sound fantastic – with a middle Eastern aesthetic that’s far preferable to that of their peers High On Fire’s. There’s even pipe-based moments that could have featured on Japanese rock legends Ghost’s fantastic Hypnotic Underworld, from 2004.

As this decade ends, hopefully more modern metal bands take a leaf out of Om and Earth’s books. SunnO))) are still carving their own path, but there are still too many me-too bands around, making like an albatross round the neck of once inventive metal. Hopefully God is Good will encourage some of the clones to expand beyond this tired template – if not, they can get their coats.