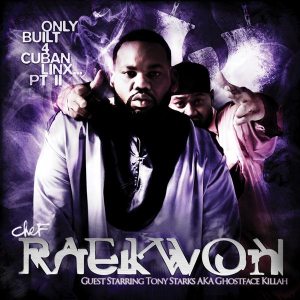 There’s an all-star cast on board here: Method Man, Ghostface, Masta Killa and RZA represent the Clan, while Busta Rhymes, Styles P and Jadakiss pop up for various guest verses and Dr Dre, Alchemist, Pete Rock and even Rae himself provide excellent production. The late J Dilla is credited on three productions, one of which, the hearfelt ‘Ason Jones’, features the equally deceased Ol’ Dirty Bastard. But it’s Slick’s Rick unmistakable flow that’s most welcome, completely owning album highlight ‘We Will Rob You.’

Despite the all star cast, it’s the main man Raekwon who steals the show. Not only do his lyrics shine, the chemistry between himself and long-time collaborator Ghostface is at an all-time high. He’s managed to produce an LP that’s not only proof Wu Tang can still be great in 2009, abundant in nostalgia (‘New Wu’ feat. Ghostface and Masta Killa) and hard posse cuts up there with the best Wu (‘House of Flying Daggers’ feat. Ghostface, Inspectah Deck and Method Man), but maybe the best hip-hop record of 2009 too – sorry Jay. Cuban Linx II should satisfy the needs of even the most discerning old-time Wu fan; granted, only time will tell whether these tracks match the timeless authenticity of ‘Criminology’, ‘Ice Cream’ and ‘Incarcerated Scarfaces’ from Pt. I, but I’ve got a good feeling they’ll come close.