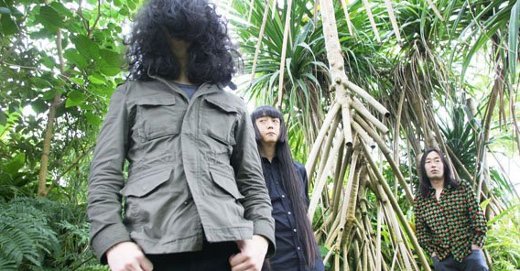 DFA Records continue to expand their stylistic portfolio with a new album on their Death From Abroad sub-label from Yura Yura Teikoku, Hollow Me.

Yura Yura Teikoku are a Japanese three-piece with impeccable underground credentials who’ve made the transition into mainstream celebrity in their homeland. It’s easy to see why. Their songs represent a loving but decidedly skew-whiff take on classic grooving 70s rock ‘n roll, with overtones of krautrock and punk-funk. DFA accurately describe their sound as existing somewhere between that of Can, 10CC, T Rex and ESG; we’d venture there’s a big Talking Heads influence in there too.

Of course, Hollow Me is all sung in Japanese – which at least means one isn’t put off by dodgy lyrics and can concentrate on enjoying the gorgeous melodies. This has to be one of the most immediate, warmly textured, generous-sounding pop/rock albums we’ve heard in a long time, but according to DFA the songs were composed to impart a feeling of emptiness or "hollowness". Guitarist Shintaro Sakamoto is renowned for his flamboyant axe-work, so in the context of Yura’s oeuvre the album is indeed a restrained, almost minimalist offering.

Apparently Hollow Me is the band’s tenth studio album to date. Also included in the Death From Abroad CD/digital release are tracks from the Beautiful EP. Everything was recorded at the Peace Studio run by Japanese psych legends White Heaven, and produced by that band’s You Ishihara.

Hollow Me / Beautiful is out September 14.