Richie Hawtin's Minus label make Contakt at the O2 Academy 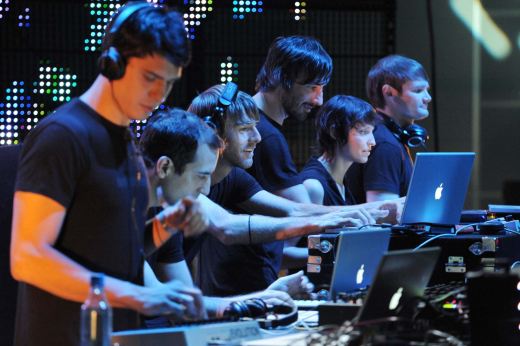 Holy Hawtins – how’s that for an assembly line?

Undeterred by the criticism that followed the infamous Cube at Sonar 2008 (if you ask us, it was actually pretty cool – you just didn’t need six hours of it), Richie Hawtin‘s Minus label will continue to get conceptual this month at London’s O2 Academy, Brixton.

On Saturday September 26, Hawtin will take to the decks for more Contakt action, with pretty much the entire Minus crew in tow: Magda, Troy Piece, Marc Houle, Gaiser, Heartthrob, JPLS, Ambivalent, Barem, Ali Demirel on visuals, and support from Rebekah Aff and Fabrizio Maurizi. How many laptop chargers is that going to consist of? We don’t pity the poor jobber (probably JPLS) who has to untangle them all at the end of the night.

Here’s the blurb for the show: "DJ Richie Hawtin continues to showcase new technologies and push the evolution of music-making further into the future. His recording work under the moniker of Plastikman explored the minimal side of techno, inspiring many imitators who still to this day remain in his shadow. Berlin’s reputation for being the centre of audio experimentation rests proudly on the shoulders of DJs such as Hawtin and the Minus stable.

"Mesmerizing visuals perfectly synchronized to the music, and a stage set-up that allows all of the Minus artists to seamlessly mix together, blurs the line between when one DJ or Live act begins, or ends. Richie Hawtin, Magda, Troy Pierce, Marc Houle, Gaiser, Heartthrob, JPLS, Ambivalent & Barem become ‘as one’.

"A massive custom LED lighting installation will be rigged across the main stage, state-of-the-art surround sound will be especially customised to fit the Academy, and the main hall will have a full dance-floor fitted."

Tickets are 22.50 and available here.